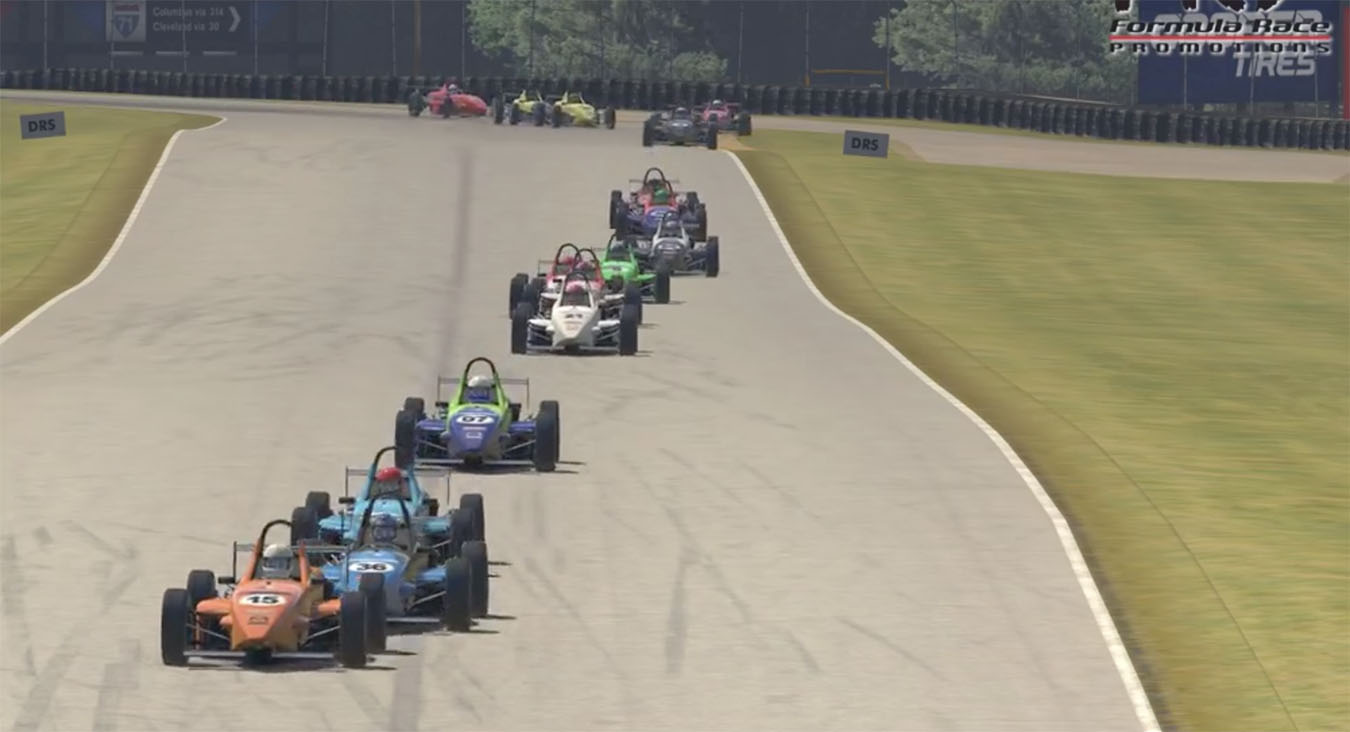 It was back-to-back race wins for Zachary Rivard Thursday evening during rounds three and four of the FRP iRacing Challenge Presented by Hoosier Tire. Dominating the Mid-Ohio Sports Car Course event, Rivard drove away from the field to score a pair of race wins and garner maximum points to take over the championship points lead.Taking advantage of some issues behind him and laying down some great opening laps, Rivard was unchallenged through rounds three and four to take the checkers.

It was a bit of a hectic start during race one as pole position winner Rivard (Thursday Pools Rivard Racing)was able to get the jump while others had trouble. Current point leader and third place qualifier Justin Hille (Everard Motorsports) had contact without side front row starter and virtual teammate Reece Everard (Everard Motorsports) as both fell down the running order to finish 17th and 18th respectively. Rivard immediately opened a gap on the field and never looked back, extending his gap to 2.5 seconds by the conclusion of lap  two. The action did not stop there as Connor Clubine (Britain West Motorsports)came to a stop on the track during lap three while Dan Clarke (Brad Hayes Racing) and Burton August (Rice Race Prep) were engaged in an intense battle inside the top-five. Clarke then got into the back of August on lap four and spun,falling back to P10. 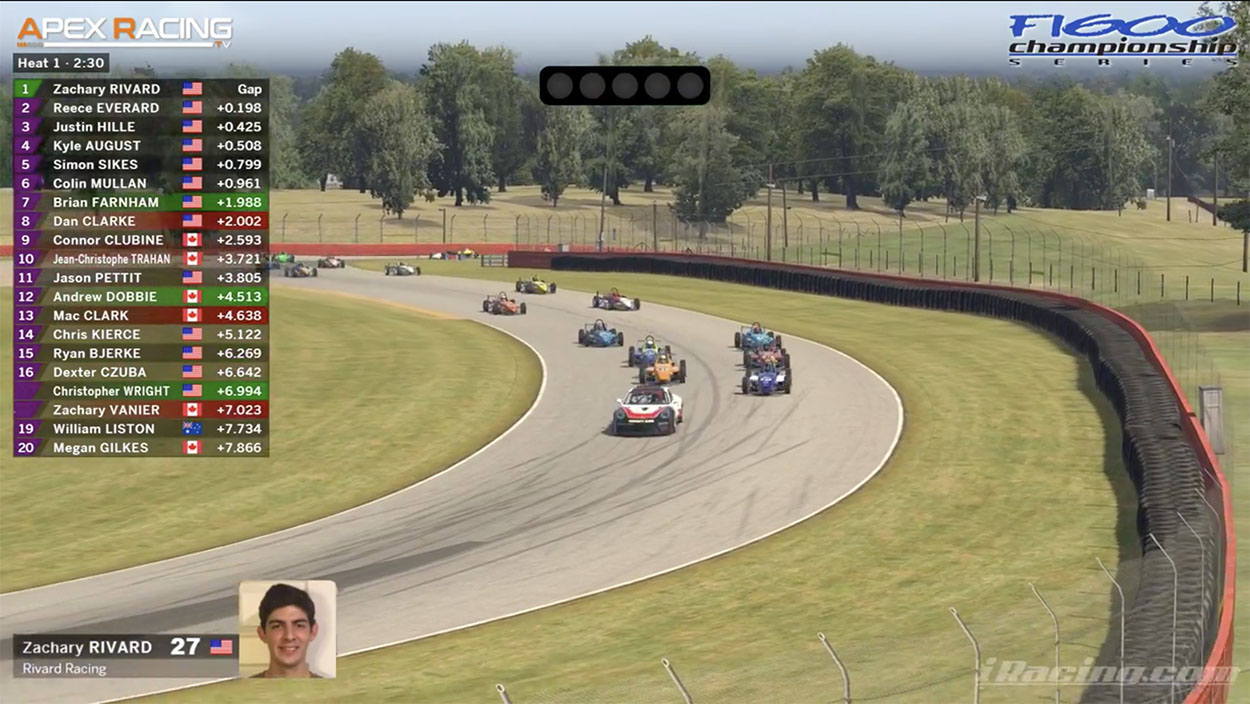 By the time the race reached the halfway mark and taking advantage of the clear track in front of him, Rivard extended his lead to six seconds as drivers battled behind him. Clarke and Simon Sikes (Rice Race Prep) made contact while running in the top-five with Clarke getting the worst of it and falling back to tenth while Sikes rejoined the track in sixth. Taking advantage of the mayhem, Brian Farnham (Farnham Racing) moved into second and looked to be in contention for a podium result.By lap 12, Rivard had opened the gap to 8.7 seconds as a four-car battle for fifth between Jean-Christophe Trahan (Britain West Motorsports), Chris Kierce (Bjerke Motorsports), Christopher Wright (Korben Dallas Racing), and Sikes ensued. With the checkered flag flying at the end of lap fourteen it was Rivard who topped the virtual podium ahead of Farnham and August, who were separated by a mere two tenths of a second. Colin Mullan (Rice Race Prep) had a quiet race to finish fourth ahead of Trahan, Kierce, Wright, Sikes, Clarke and Megan Gilkes (Vallis Motorsport).

Rivard once again led the field to green at the start of race two and similar to race one, capitalized on his pole position. With a clean start for the top-ten drivers, a minor incident deeper in the field was the only hiccup during the opening lap. Rivard quickly opened a gap on his rivals as Mullan and Farnham battled for second swapping the position back and forth on several occasions. On lap five, Farnham struggled for momentum as Sikes and August snuck by to improve their positions. Rivard continued to open his gap to the rest of the field stretching his lead to 3.8 seconds with Sikes, Mullan, August, Farnham and Trahan all battling for fifth. 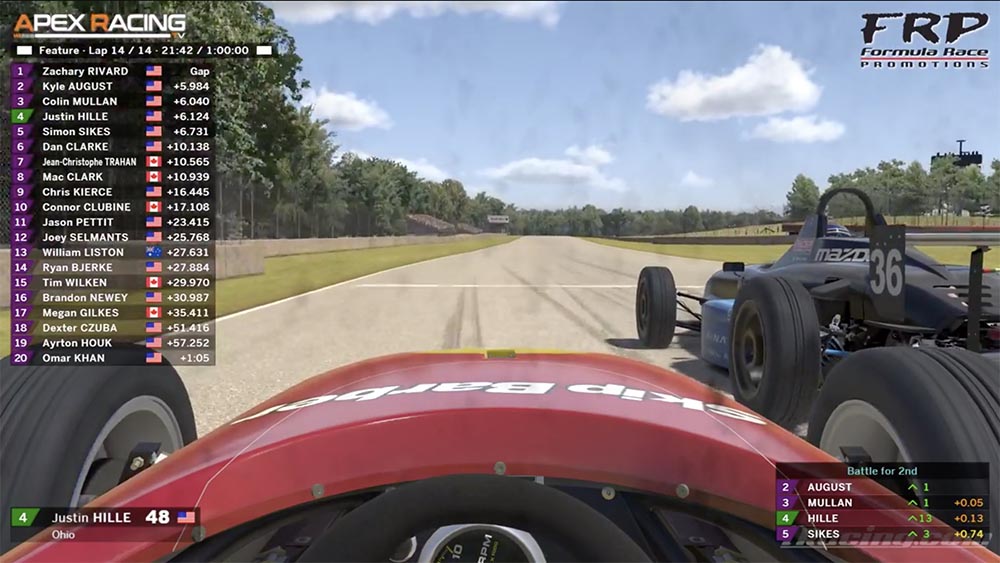 After disaster for Farnham on lap seven as contact in turn five ruined any chance for a strong result, the trio of Sikes, August and Trahan were hotly pursued by Clarke, Hille and Mac Clark(Britain West Motorsports). Hille moved forward twelve positions by lap ten and gained one more position in the final laps to end round four in fourth. Rivard added another win taking the checkers by 5.433 ahead of Mullan and August. Hille edged Sikes for fourth as Dan Clarke crossed the stripe in sixth. Trahan ended his race in seventh as Clarke, Clubine and Jason Pettit (Brad Hayes Racing) rounded out the top-ten.

Formula Race Promotions would like to invite you to tune into the rounds five and six of the FRP iRacing Challenge Presented by Hoosier Tires series two next Thursday at 7:00pm EDT. Please stay tuned to our website and social media channels for more information.

For more information on any of the Formula Race Promotions promoted series, please visit www.FormulaRacePromotions.com. For questions, comments or concerns, please feel free to reach out to Bob Wright RobertW@RaceFRP.com or Clay Hutchison ClayH@RaceFRP.com. For media inquiries, please contact RTD Media &Management via email to Info@RTD-Media.com or Media@RaceFRP.com.