Zachary Rivard (Thursday Pools Rivard Racing) and Dylan Christie (Team Pelfrey) returned to the top step of the podium during rounds five and six of the FRP iRacing Challenge Presented by Hoosier Tires at the VIRginia International Raceway (VIR) this past Thursday.In nail-biting finishes for both races that involved some last lap carnage, the second virtual series has come to a close with Rivard claiming the oveall championship and accompanying prize towards his 2020 campaign.

Simone Sikes (Rice Race Prep) led the field to green for round five and immediately jumped to the point, holding the inside line through the opening corner. With Max Esterson (Team Pelfrey) applying pressure from the outside line and eventually getting around Sikes on the exit, Sikes overshot turn three and dropped a wheel falling back to the fourteenth position. Further drama during the opening lap ensued as Jackson Lee (Rice Race Prep) dropped back to ninth and championship hopeful Justin Hille (Everard Motorsports) made contact falling back to P15. More contact saw Jean-Christophe Trahan (Britain West Motorsports), Brian Farnham (Farnham Racing), Christopher Wright (Korben Dallas Racing), Chris Kierce (Bjerke Motorsports), Omar Khan (Kahn Racing) and Zachary Vanier (Britain West Motorsports) head to the pits during the chaotic opening lap. 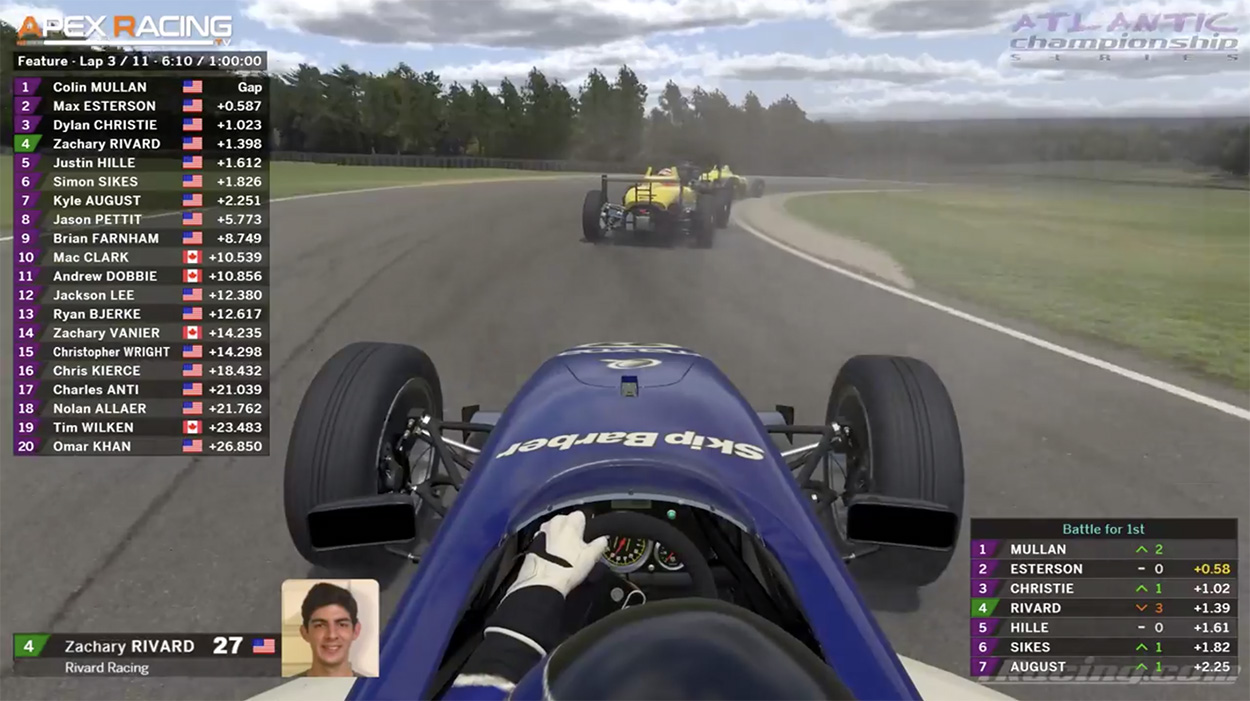 Settling down for the start of lap two, Rivard found his way to the point as he and Esterson continued their battle for the lead. Colin Mullan (Rice Race Prep) and Christie were engaged in a battle for third and fourth as they trailed the front duo by more than two seconds. Jackson Lee (Rice Race Prep), Sikes, Jason Pettit (Brad Hayes Racing) and Hille were engaged in a battle for fifth with Hille slicing his way through the group to lead the four-car pack. At the start of the final circuit, Esterson led Rivard but when the checkered flag flew, the front two positions would change as Rivard won the drag race to the line taking the win by a scant .006.

Behind Rivard and Esterson, the top-five were completed by Mullan, Christie and Hille as Pettit, Sikes, Burton August (Rice Race Prep), Megan Gilkes (Vallis Motorsports) and Ryan Bjerke (Bjerke Motorsports) rounded out the top-ten. The fastest lap of the race was claimed by Esterson while Farnharm was the round five hard charger.

Race two would see round one winner Zachary Rivard score the inside front row starting position courtesy of scoring the fastest lap of race one. A cleaner start for round six across the entire field saw only a trio of cars in the pits after the opening lap as Rivard kept it cautious at the front of the field. With the points lead heading into round six and knowing what was needed to claim the title, Rivard tiptoed his way through the race taking very little chances. 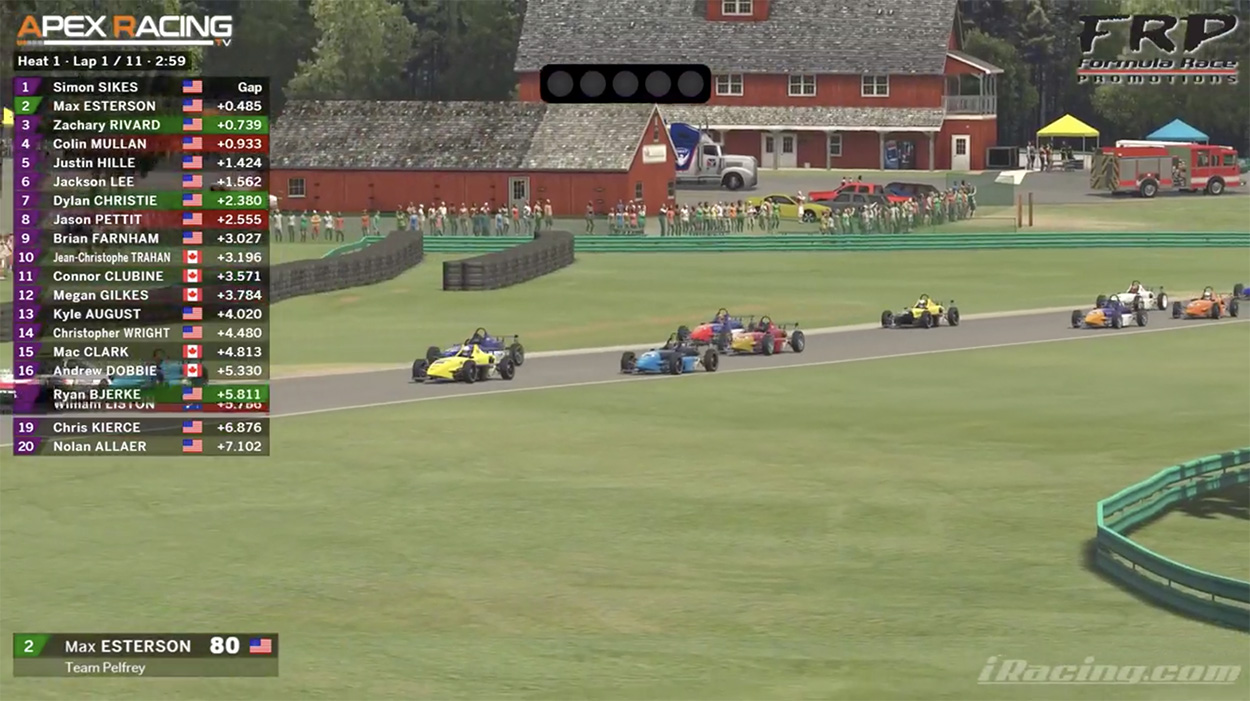 On lap three there were seven drivers within two seconds as a blanket could be thrown over the group and this continued through the next few laps. Needing to score the win, Hille lost the draft and then had problems in the Oak Tree corner dropping a wheel and spinning, falling down the running order. With four laps remaining, Sikes,Christie and Mullan begin to break away from the rest of the field but only two laps later the top-six were back within two seconds again. Mullan, Esterson and Christie were now the top-three and went three wide into turn one, bunching the group even tighter providing for a drama filled last lap.

With the white flag in hand, Rivard found his way to the front of the field with August in tow as four drivers assumed the battle for the win. A three-wide effort into turn fourteen between Sikes, Mullan and Esterson saw Sikes go into a half-spin as Esterson took evasive action to the grass. Out of the melee came Christie who entered the corner in fourth but exited in the lead and drove unchallenged to the checkered flag. Christie scored the win as Sikes regained control of his car to finish second ahead of Mullan, Esterson and Series II Champion Zachary Rivard. Farnham found his way to sixth as Mac Clark (Britain West Motorsports) ended his series in seventh. Pettit, August and Lee rounded out the top-ten with Esterson scoring the fastest lap of the race and Farnham earning the Hard Charger award.

FRP would like to congratulate all race winners from both Series I and Series II of the FRP iRacing Challenge including Max Esterson, Scott Andrews, Dan Clarke Zachary Rivard, Justin Hille and Dylan Christie. Also,congratulations to Series I Champion Max Esterson and Series II Champion Zachary Rivard. Based on the online FRP iRacing Challenge, the 2020 season is set to be a good one. See everyone in three weeks’ time at the Pittsburgh International Race Complex.

For questions, comments or concerns, please feel free to reach out to Bob Wright RobertW@RaceFRP.com or Clay Hutchison ClayH@RaceFRP.com. For media inquiries, please contact RTD Media &Management via email to Info@RTD-Media.com or Media@RaceFRP.com.