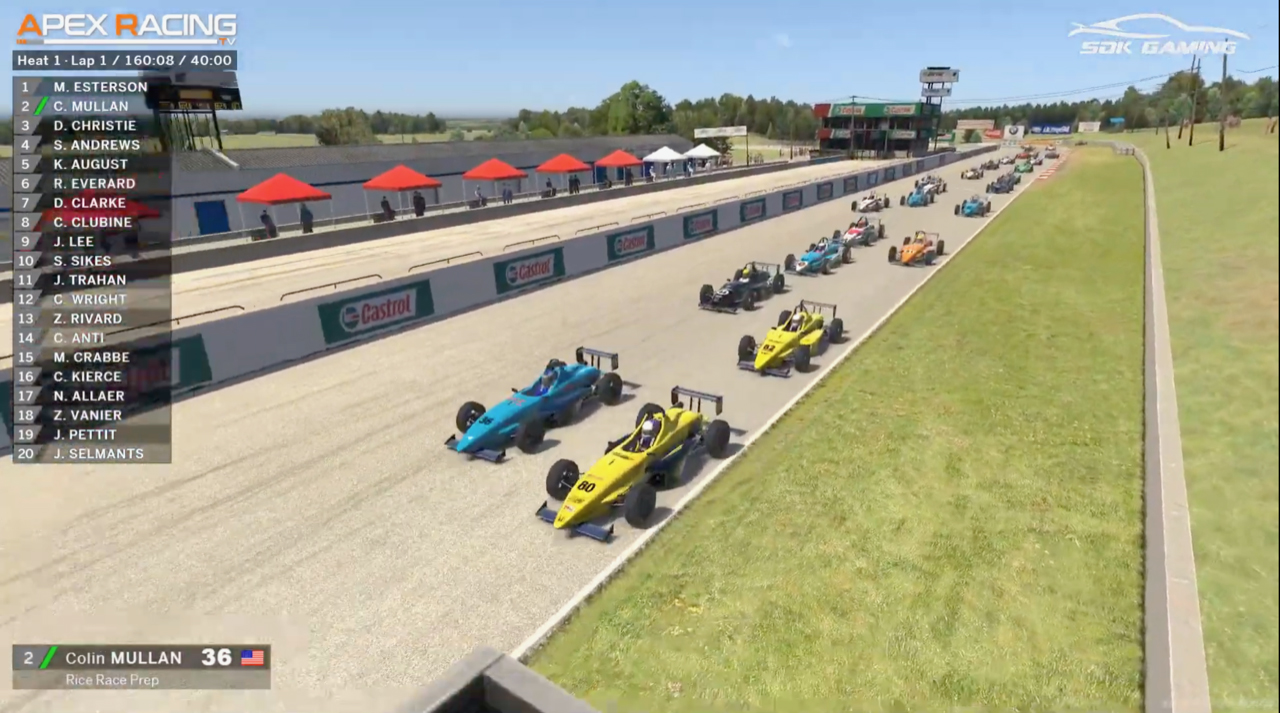 Two new drivers found their way to the top of the virtual podium in rounds fiveand six of the FRP iRacing Challenge Presented by Hoosier Tires last night. Alumni driver Scott Andrews (HRX USA) scored the round five victory while Dan Clarke (Brad Hayes Racing) topped the podium blocks in round six. With three wins in six races and only one result outside the top-five, Team Pelfrey driver Max Esterson is your first ever FRP iRacing Challenge champion.

‍
“A huge congratulations to our two new race winners,” explained Bob Wright. “This shows the true diversity of our series as we had four different winners in six races. Congrats to our newest race winners Scott Andrews and Dan Clarke as well as Max Esterson, our first series
champion.” It was an intense pair of races at the famed Canadian Tire Motorsports Park (CTMP) as the fast layout provides for several drafting and overtake opportunities and often puts on some of the best racing of the year. The same could be said in the virtual world as several of the iRacing talents found themselves in an all-out battle for the win. Point leader Max Esterson (Team Pelfrey) had a difficult first lap in race five as he ran wide in corner two losing a few positions. Pole position winner Colin Mullan (Rice Race Prep) inherited the lead after a poor start but ran wide on lap two, dropping to sixth before rebounding one lap later back into the top-three and the fierce battle for the lead. With Andrews at the point, Reece Everard (Everard Motorsports) made a bold move on lap four to go from sixth to fourth in one braking zone while Zachary Rivard (Rivard Racing) gained five positions in the opening four circuits to find himself in the top-ten. 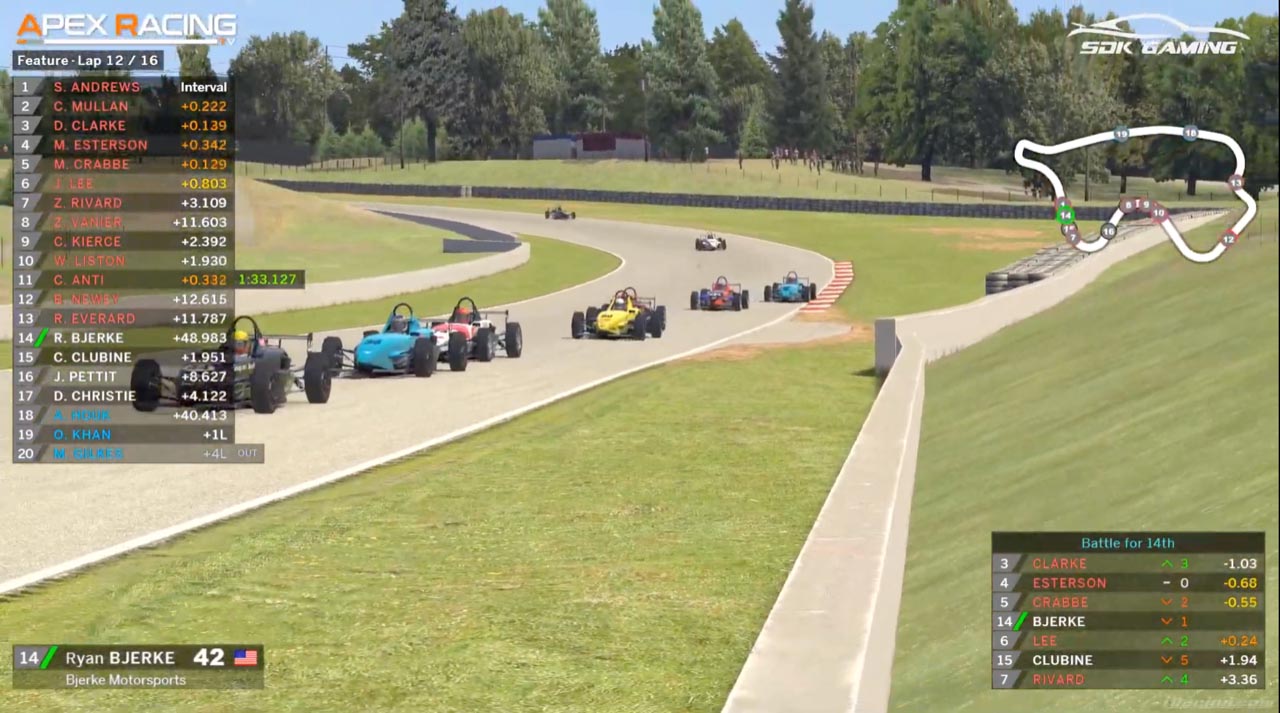 The top four drivers began to open a gap on the rest of the field on lap seven as Andrews lead Everard, Mullan and Clarke. In a back and forth battle, Clarke lost his front nose on lap nine but continued his run at the front before a spin on lap twelve took him out of contention. With
Andrews back to the point on lap eleven and opening the gap, he never looked back as was able to hold off Mullan in the closing stages to take the win. Clarke rebounded to cross the line in sixth, just ahead of race five Hard Charger William Liston (Listec RaceCars). Jackson Lee (Rice Race Prep) gained a pair of positions to finish eighth with Burton August (Rice Race Prep) and Connor Clubine (Britain West Motorsports) rounded out the top-ten. 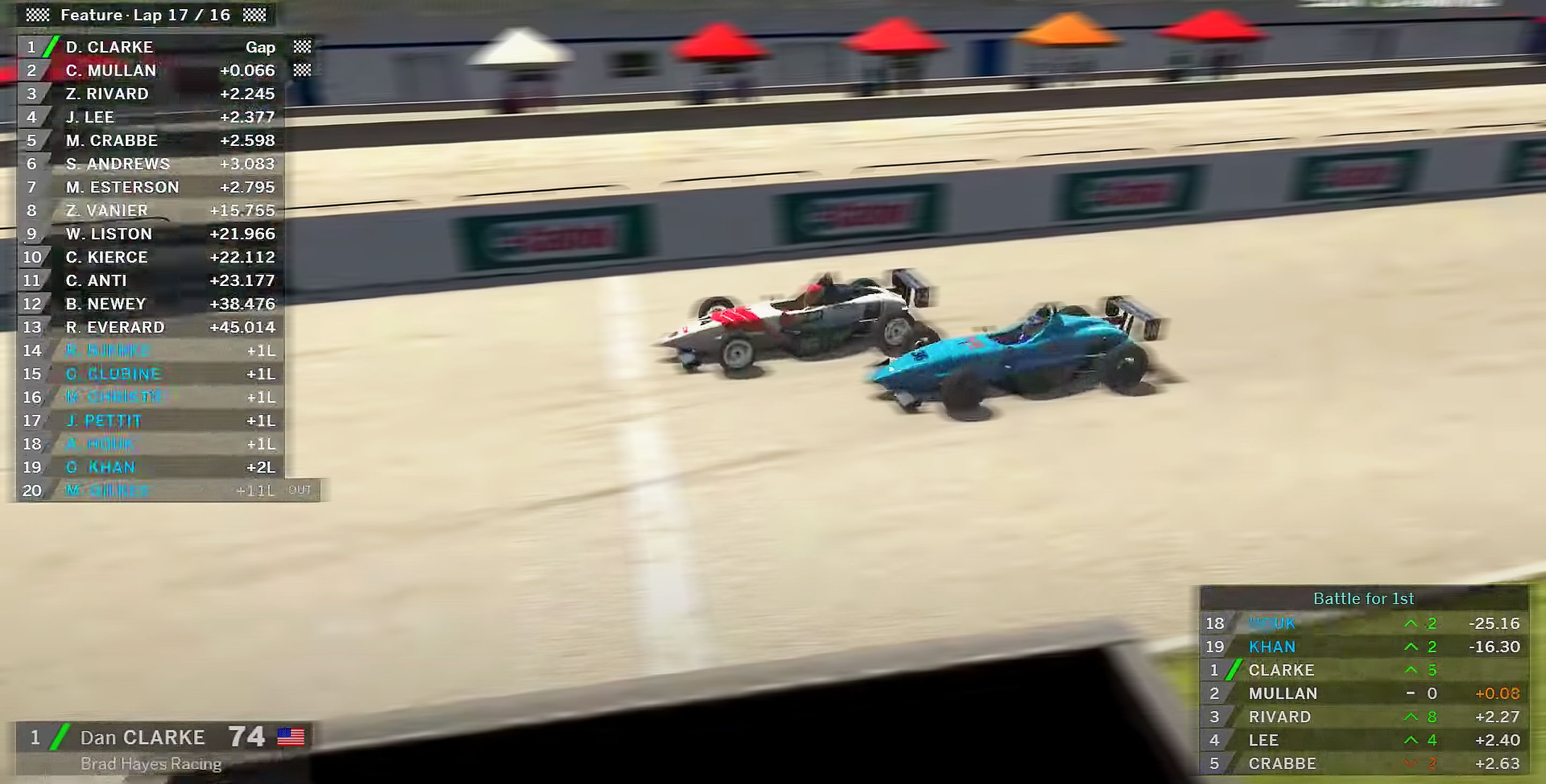 With round six grid set on the finishing positions from race five, Andrews would lead the field to the green as a mid-pack scramble sent four or five cars off the track in corner one. The always fast sim driver Simon Sikes (Rice Race Prep) had trouble on lap two losing the car and crashing hard while Clarke and Mullan ran second and third behind Andrews. Some nose to tail racing for the middle part of the race brought seven cars into a close battle for the lead as multiple battles began to happen throughout the field. On lap ten, Mullan held the point ahead of Andrews, Clarke, Esterson and Rivard, but that would all change during lap fourteen. Andrews would spin opening the door for others while Clarke moved to the front. Mullan held on to second as the pair battled for the win and, in a photo finish, Clarke took top honors by .066, a perfect way to end the first FRP iRacing Challenge season. Rivard ended round six on the podium in third while Lee had another move forward to finish fourth. Miles Crabbe (Citation Engineering), Zachary Vanier (Britain West Motorsports), William Liston, Chris Kierce (Bjerke Motorsports) and Charles Anti (AntiSpeed Competition) ended their series with top-ten finishes.

‍
In an uncharacteristic close to the series, Dylan Christie (Team Pelfrey) entered the final event sitting second in the championship points battle and a chance at the win. A pair of disappointing results after some on track contact saw him outside the top-fifteen but he claimed enough points to finish third in the series standings, edged out by Collin Mullan for second.