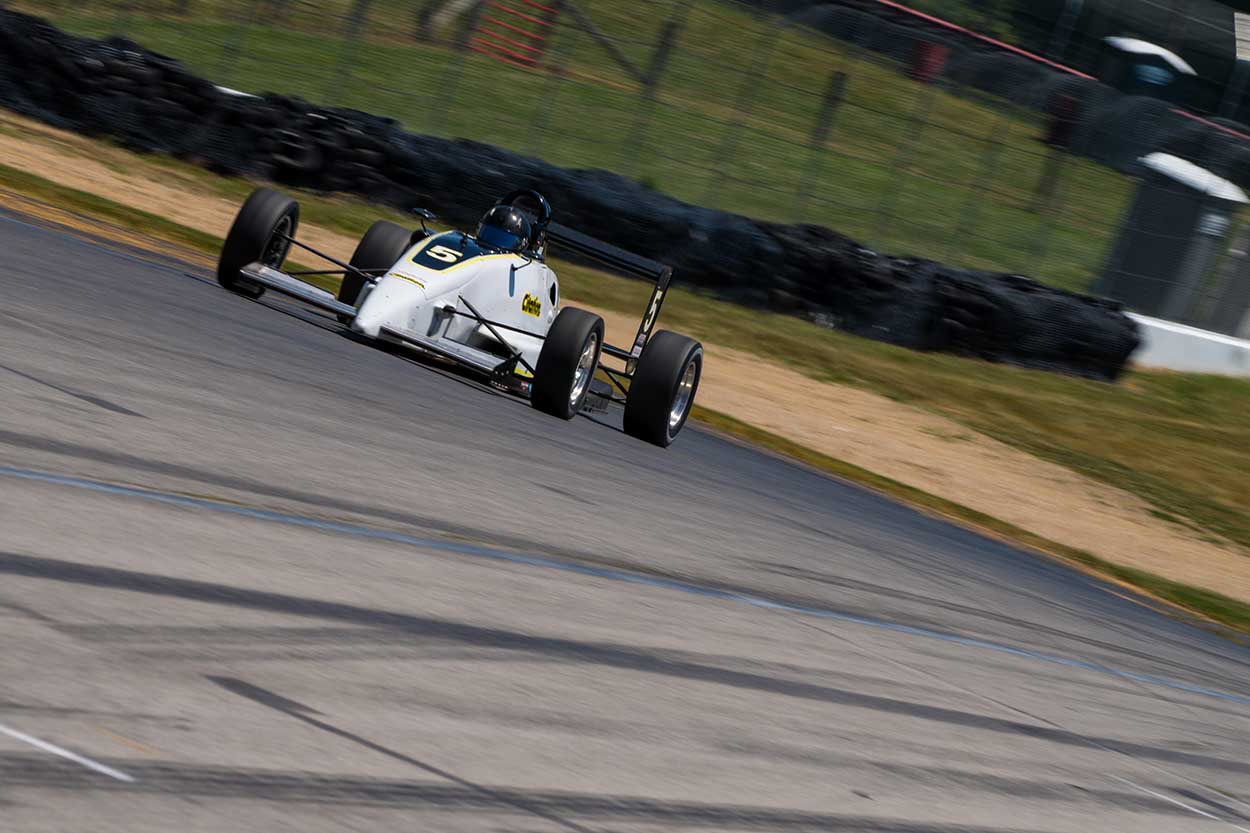 “New and returning drivers to the FRP podium”

It was hot and humid at the Mid-Ohio Sports Car Course as the Formula Race Promotions program competed their second event weekend in the past three with podiums full of both new and returning drivers. With the first wheel-to-wheel action complete on Saturday, teams and competitors shifted their focus to Sunday’s racing action in the effort to maintain or improve their finishing results.

It was Max Esterson in the F1600 qualifying session as he put his Team Pelfrey #80 on top by a scant .021 over Zachary Rivard and Jackson Lee putting three different teams in the top-three. Triple race winner Simon Sikes scored the fourth quickest lap of the session as Brad Hayes Racing’s Jonathan Kotyk was fifth as the top-five were separated by only .240.

It was a tough start for the first Formula 1600 race of the weekend. A wave off on the start sent the field around the track for a second pace lap. Soon after the green, a multi car incident in the tightly packed field saw Esterson and Sikes squeak by, with Kotyk, Lee, Rivard, Burton August, William Velkoff and Peter Portante all out of the race. With the track completely blocked, the red flag was brought out sending the field back to the pits without having completed a lap. With a substantial cleanup, the session was ended and declared a non-race, setting the stage for a triple header on Sunday.

Rice Race Prep driver Simon Sikes overcame an early caution period to win his fourth in a row in the first race of the weekend. A photo finish took place for the three Team Pelfrey drivers in second through fourth with Dylan Christie getting the best of Dexter Czuba and Max Esterson with Jackson Lee coming home in fifth while Scott Rubenzer won Masters.

Czuba dethroned Sikes in the second race of the weekend putting a new driver up top as he scored the win by .108. Sikes continued his podium performances with a second-place result to extend his point lead while Christie added a third-place result to his weekend resume. With the top five finishers remaining the same drivers as the first round of the day, Lee finished fourth with Esterson in fifth. Rubenzer was once again the top driver in the F1600 Masters class.

Rubenzer went on to make it three-for-three on the weekend and six-for-six in the season in the F1600 Masters class while Jackson Lee had a breakthrough race in the third wheel-to-wheel action of the session in F1600. Running in the top two positions all race long, Lee took the point for good on lap fifteen and never looked back, scoring his fastest lap of the race on the final circuit and his first win of 2020. Esterson closed his strong weekend with another second-place finish as Czuba finished third after his win earlier in the day. Robert Dietz made his way to the top-five and finished fourth while Burton August rebounded to end his weekend in fifth. Point leader Simon Sikes failed to complete a lap and was classified in P15. 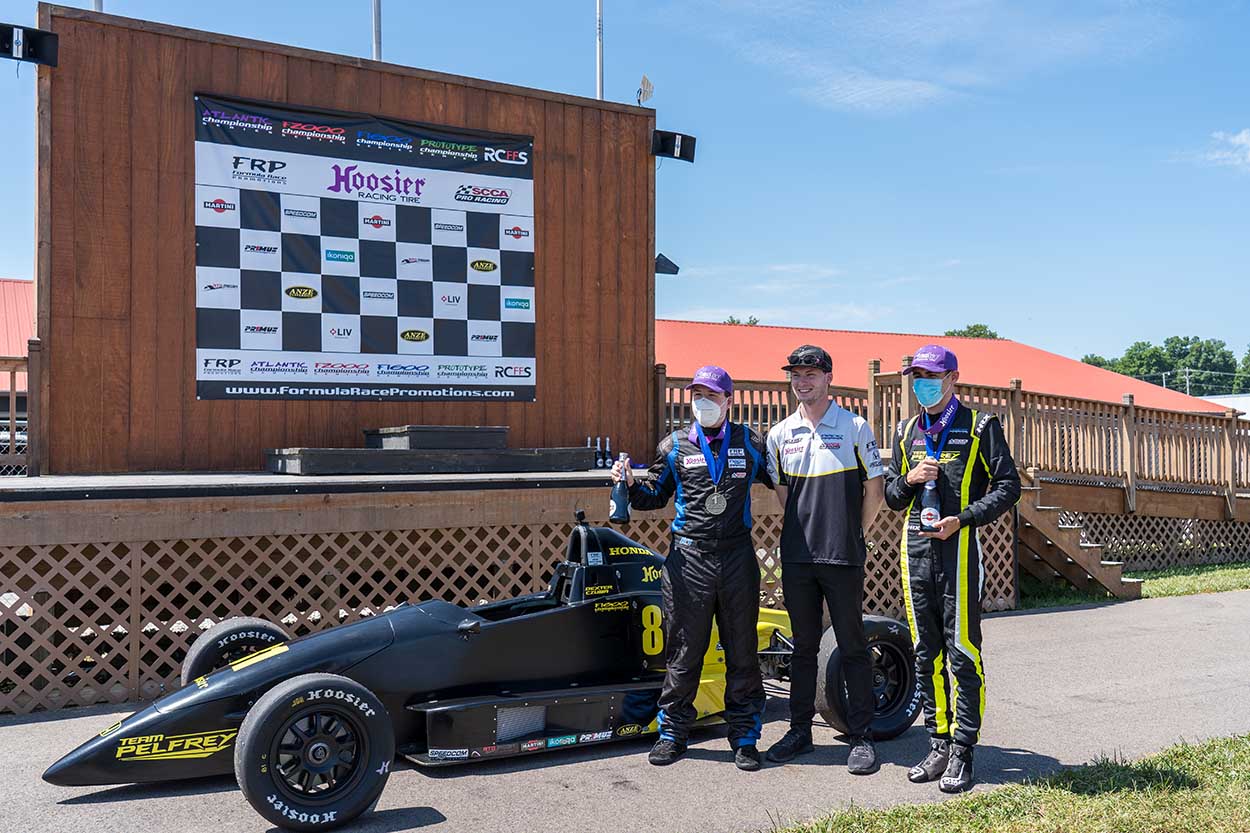 Sam Ryan took the overall win and was atop the heap in the Formula Vee Masters class scoring the class and overall win. Tim Sager joined Ryan on the podium finishing second in class while Greg Davis finished third, Dennis Potocki fourth and Gregg Grub in fifth. Matt Clark topped the Formula Vee classifications with a solid second place result overall and was joined on the podium by Luke Testerman in second and Ray Qualls in third. Raymond Carmody and Garrett Viliano battled hard in the top-five finishing fourth and fifth respectively.

Sunday saw Clark return to the top step of the Formula Vee podium as he was joined by Chris Elwell, who scored his first podium result of the season. Testerman made it a double podium weekend with an impressive third place effort as Qualls and Villano crossed the line in fourth and fifth. Mark Farnham took the honors in the Formula Vee Masters class, out-dueling Ryan and Sager to the checkered flag as the top three finished within six tenths of one another.  Greg Davis found his way to fourth in class with Grubb adding his second fifth place finish of the weekend. 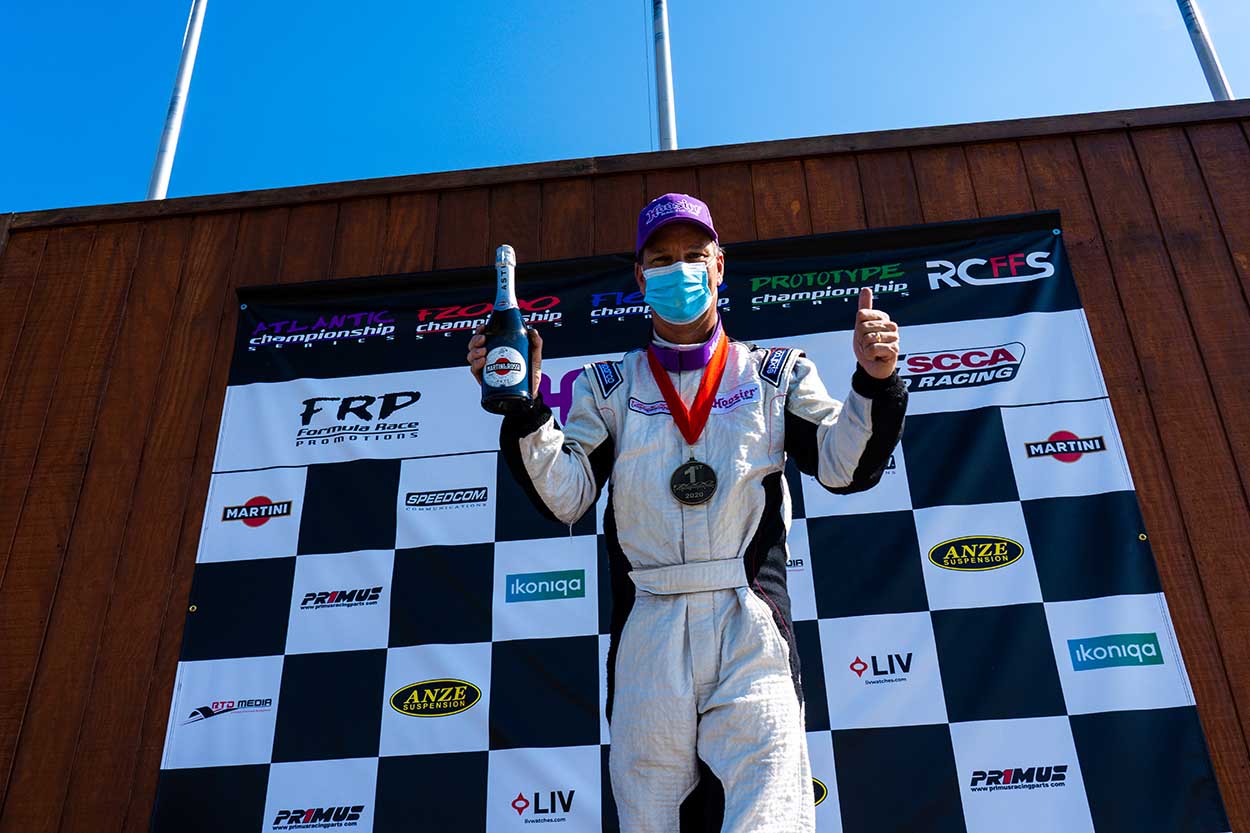 During the long green flag race, Dixon stayed comfortably in the lead, adding a third F2000 win to his victories from the opening event weekend only two weeks ago. After a lot of action and position changes through the rest of the field, FRP’s Bob Wright stood on the podium in the second position while Varacins joined Dixon and Wright in the podium celebration. Mitch Regadas and Dave Weitzenhof rounded out the top-five.

Up on the podium, Dixon remarked, “It was great to have Bob up on the podium. He wears so many hats pulling FRP together so we can all race, and it is truly fun when he is able to mix it with us on track.”

In the second race of the weekend it was once again Dixon who would roll off from the pole position in the F2000 class and never relinquish that spot. Scoring his fourth win in as many races, Dixon set a new FRP F2000 lap record of 1:23.109 and once again has a strangle hold on the championship after only two event weekends. Multi-time karting champion and F2000 rookie competitor Luca Mars showed steady improvement and kept Dixon in check to add another podium to his growing resume with a second-place effort as Varacins finished just behind him in third. Bob Wight and Dave Wiitzenhof finished fourth and fifth respectively. 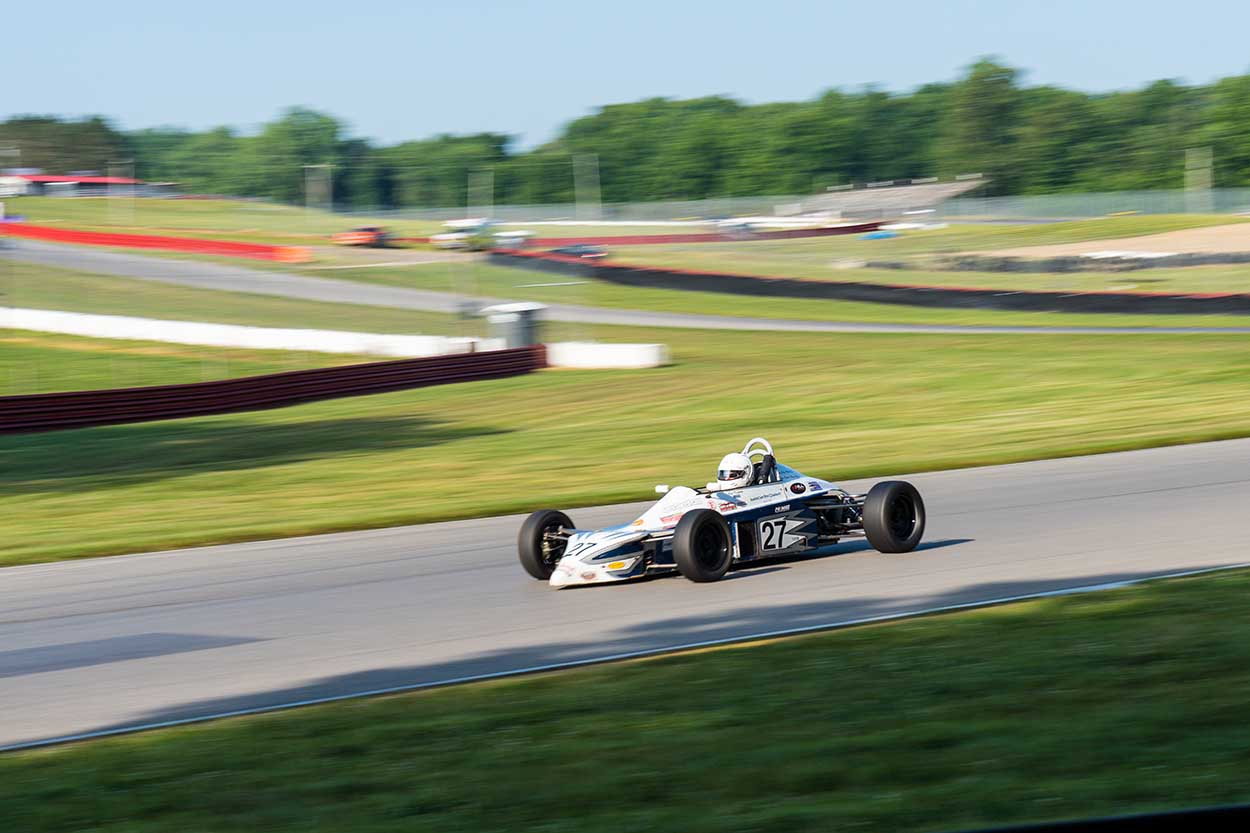 The top two positions from the end of qualifying to the final checkered flag would change as Phil Kingham was able to take the point and score the win. Pole position winner Dan Pyanowski managed to hang on and finish in the second position as Greg Peluso finished the fifteen-lap event in the third position. Dave Harmison dropped one position to finish a respectable fourth while Roux maintained his fifth place starting position to garner a top-five result.

Kingham made it two-for-two on the weekend with a dominating flag-to-flag performance and scored the win by 20.979. Harmison improved from his fourth-place result in race one to stand on the second step of the podium in race two by getting past Pyanowski on the final circuit as the pair had an epic battle all race long. Peluso and Roux found themselves in the top-five yet again, finishing fourth and fifth respectively.

The third and final Club Ford race of the weekend saw Kingham remain on the top step of the podium while Roux advanced forward from fourth to finish second. Charles Smith found his way to P3 courtesy of some attrition as Harmison was back in the top-five with a fourth-place effort. Peluso was classified in fifth while double podium winner on the day Dan Pyanowski failed to complete the first lap and will look forward to the next round. 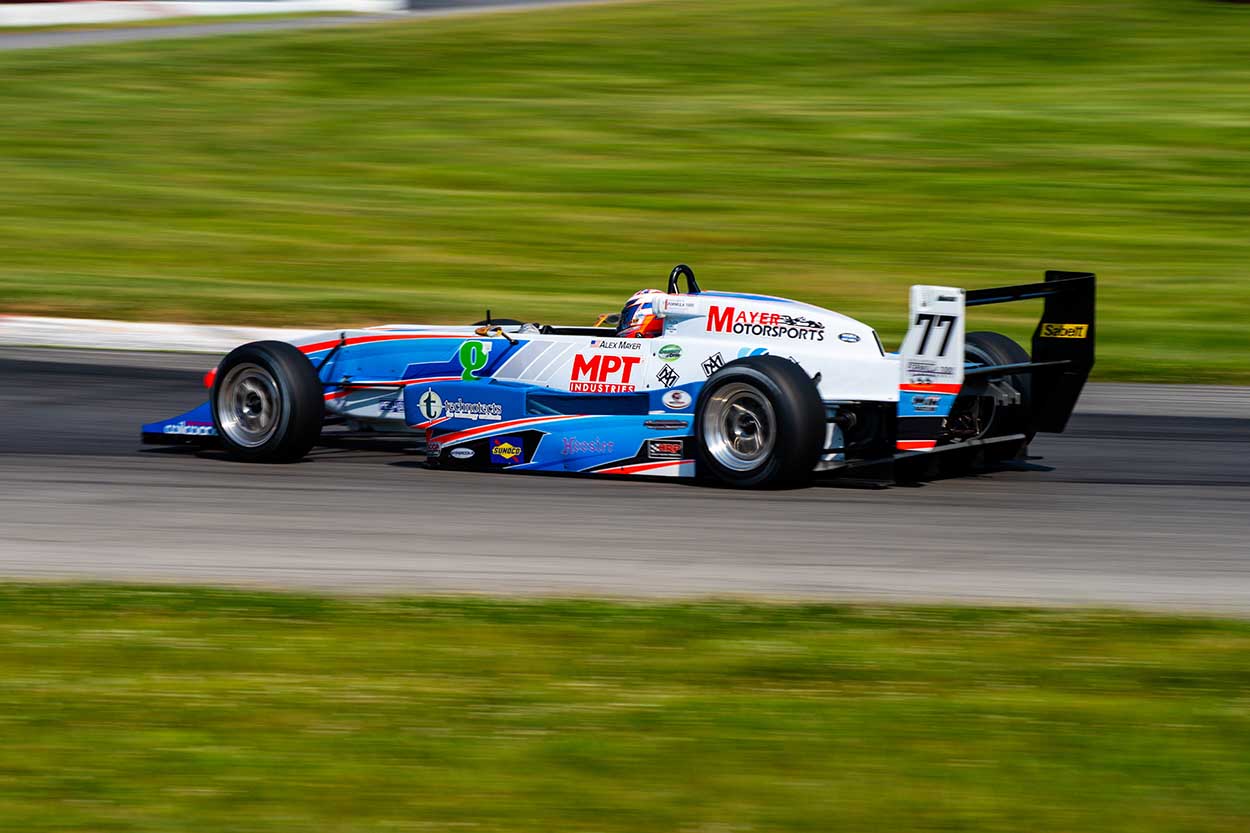 Alex Mayer took top honors in the F1000 class ahead of RileyHarris and Stephen Hamilton after he scored the pole position earlier on Saturday with a new F1000 track record. Sunday would be much of the same for the F1000 point leader as a second pole position on the weekend followed by a commanding race win gave him the F1000 sweep of the weekend. The podium results Sunday were a carbon copy of Saturday’s finishes as Harris and Hamilton rounded out the top three.

It will be another quick turn around for the Formula RacePromotions staff, teams and competitors as they will be back on track in less than two weeks. Taking on the famed Virginia International Raceway and competing along side the SCCA Pro Racing’s F4 United States Championship and FR Americas Championship Powered by Honda, in will be a jam-packed weekend in Danville, Virginia.