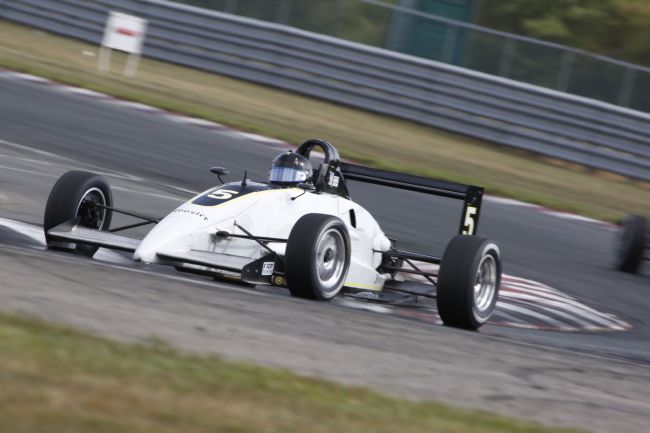 Brandon Dixon cruised to a race one victory as Peter Gonalez and John Dole ran nose to tail for the entirety of the twenty-two lap bout.

The F2000 Championship drivers entered that track in conditions the remain very pleasant. Championship leader Brandon Dixon starts on pole, Peter Gonzalez in the Radon chassis sits on the outside of row one, John Dole lines up third, and Bob Wright inherited fourth after Al Guibord couldn’t start due to car damage. The fifth spot is filled by Brendan Puderbach, this represents a return to F2000 Championship series for him after a several year hiatus.

The green flag waves, Dixon gets a decent run down to turn one, Gonzalez had to fall in behind to take second. For a moment it looked like Dole was going to challenge for the lead, maybe second, but it wasn’t to be and he took the third spot. Meanwhile, Puderbach got by Wright to take over the fourth spot.

Two laps on the books and Gonzalez is giving chase to Dixon, but the gap is starting to grow. Dole is still in third, he’s about two seconds adrift of Gonzalez. It’s a bit further back to Puderbach and Wright, but they run four tenths of a second apart.

Fifteen laps remain now, Dixon is way out front, it will take some sort of disaster for his lead to be threatened. Gonzalez however has fallen into the hands of John Dole. They run less than a second apart. A few seconds back, Puderbach continues to hold off Wright, but they still run nose to tail.

As Gonzalez and Dole cross the line to give them eight laps to go, Dole has a draft pulling him right up Gonzalez’s diffuser, they head into turn one. It can’t be done. Gonzalez is too slippery this time around. Dole will have to wait for another chance. Gonzalez seemingly has a slight advantage on the back half of the course, but the advantage isn’t consistent enough for him to build a gap.

Four laps remain, Dixon is pedaling it way out front. There’s no danger from the feuding Gonzalez and Dole behind. Puderbach continues to run without much threat in fourth, while Pepitone plugs away in his Pinto powered Van Diemen.

The lap counter has reached one, Dixon just needs to bring it home. Gonzalez still holds of Dole, but they still run less than a second apart. Puderbach is fourth, and Pepitone is fifth. As the checker flies, this order stands. Dixon takes race one here at NJMP!