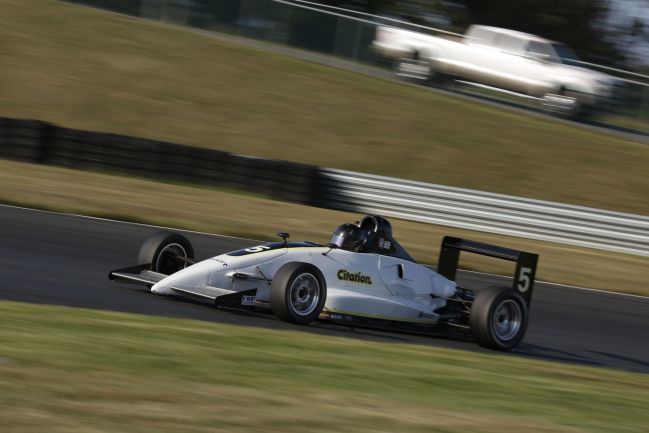 Dixon Takes Pole for Race One!

A black flag all cancelled the middle of the session, but in the remaining laps Brandon Dixon secured the top starting position for race one.

With low eighty degree temperatures and a thick covering clouds overhead, the New Jersey Motorsports Park circuit was especially hospitable for the F2000 Championship drivers. As the session rolled, championship leader, Brandon Dixon, was the first to find momentum. He’s clocked a 1:17.3, a time that’s only about seven tenths off the existing qualifying lap record, not a bad effort for a lap early in the session. Peter Gonzalez currently sits second, John Dole is third, Alan Guibord fourth, and Brendan Puderbach fifth. At around the ten-minute mark, a black flag all was brought out and the competitors had to return to the pits while a stricken car was moved from the racing surface.

The track cleanup is dragging on, there’s only six minutes left to run, but the green flag is out and the cars are back on track. They drivers should have enough time to make three attempts at improvement, but in these relatively cool conditions tire temperature could be a struggle. To the checkered flag, Dixon improves and cements his position on pole for the start of race one. Gonzalez is second, John Dole third, Guibord fourth fastest, and Bob Wright fifth. Al Guibord won't be starting the race, however, as a large shunt has rendered his car unrepairable.