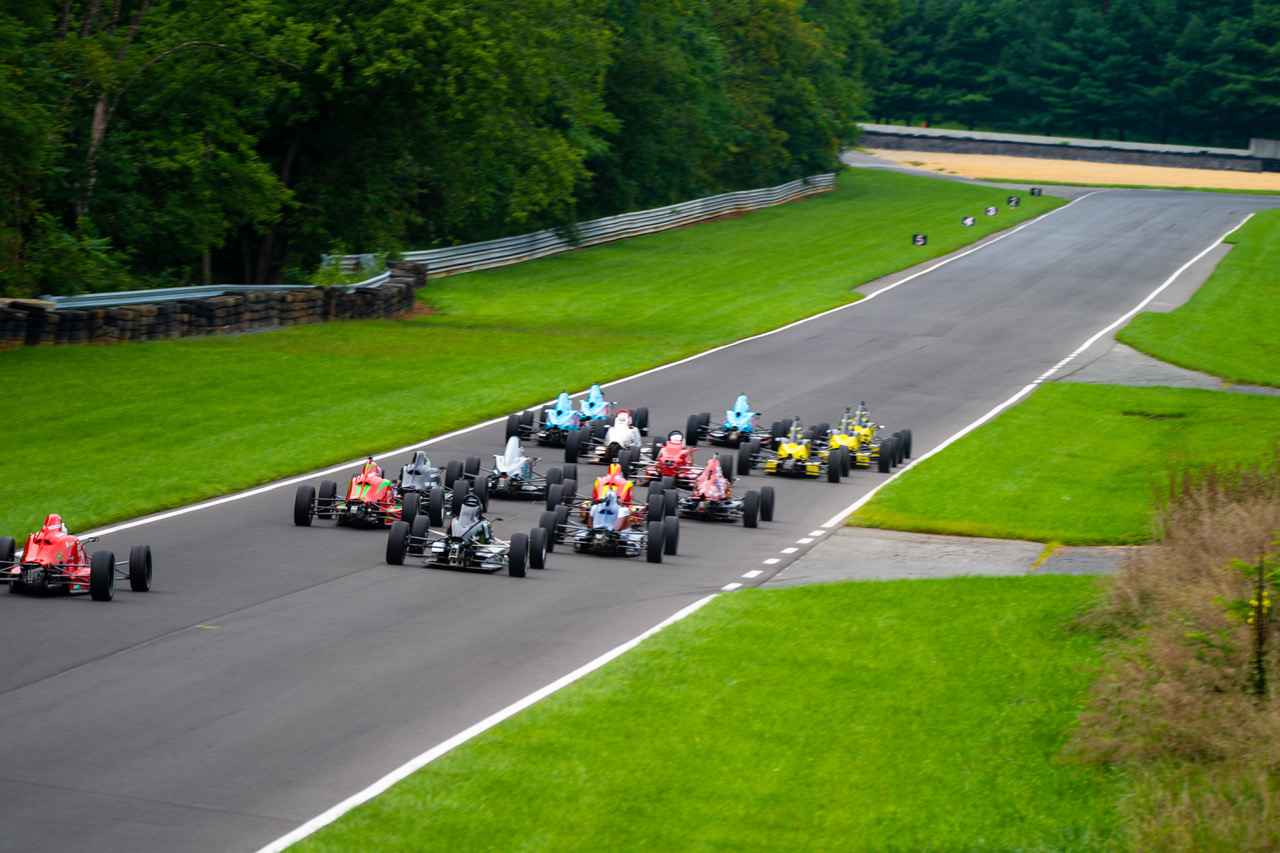 Taking on the Summit Point Motorsports Park this past weekend, the Formula Race Promotions (FRP) program would travel to West Virginia as the series crossed the halfway mark in the season. Another weekend is now in the books and another weekend of incredible competition is complete as five classes were in competition over the course of the weekend.

“What a weekend in the F1600 class,” explained Robert Wright. “F1600 had fifty-one green flag laps of racing out of a possible fifty-one while the combined class of F1000 and F2000 had forty of forty-two green flag circuits. In three races, officials needed to determine the winner by video review in two of them as the finishes were won by .001 and the other was a dead heat but video footage was used to name a winner. All three F1600 races had a front pack of five to six cars changing places every lap throughout, and then a second and third pack of equally close, clean racing. It doesn’t get any better than this.” 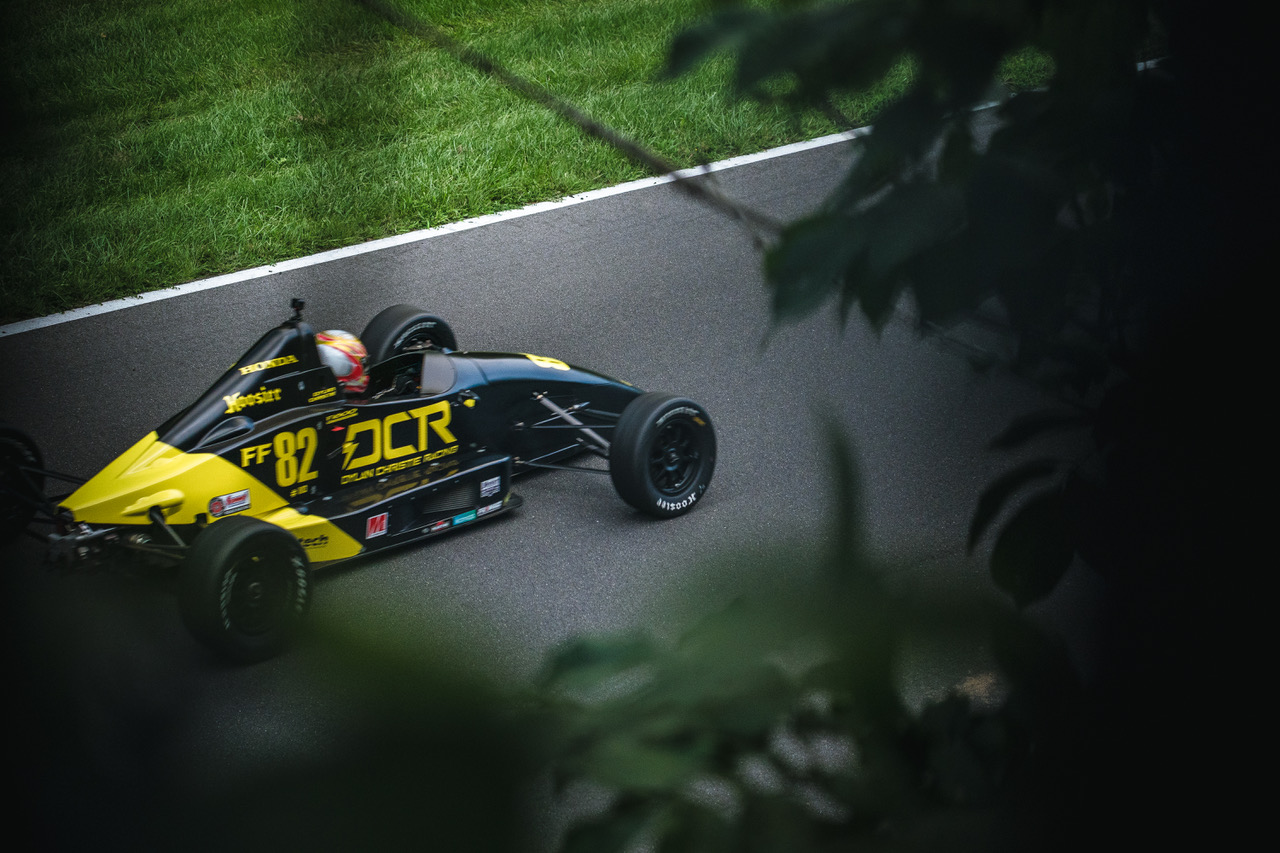 Rice Race Prep driver Simon Sikes scored the pole position for race one by .276, the largest difference between first and second place drivers all weekend long. Turning that pole run into a race win in the first wheel-to-wheel action of the weekend, Sikes kept his Mygale at the front of the field to score the win over his teammate Jackson Lee, who claimed the fastest lap of the race and pole position for race two. Team Pelfrey had a hold of positions three and four with Dylan Christie and Dexter Czuba with Burton August having a strong run to finish fifth.

Christie would rise to the top before the checkered flew on lap seventeen of the second race of the weekend as he outdueled championship point leader Sikes to the win. Lee was able to garner his second podium result of the weekend with a third-place effort while August improved his result from the opening event of the weekend to finish fourth en route to the fastest lap of the race. After a disappointing result in the first event on Saturday due to wheel-to-wheel contact, Max Esterson found his way to the top-five finishing fifth.

Dylan Christie continued his winning ways on Sunday taking his second win of the weekend as Sikes and Lee claimed P2 and P3 making the race three podium a carbon copy of race two. Esterson continued to trend up over the weekend to close Sunday with a fourth-place effort as Czuba finished fifth. 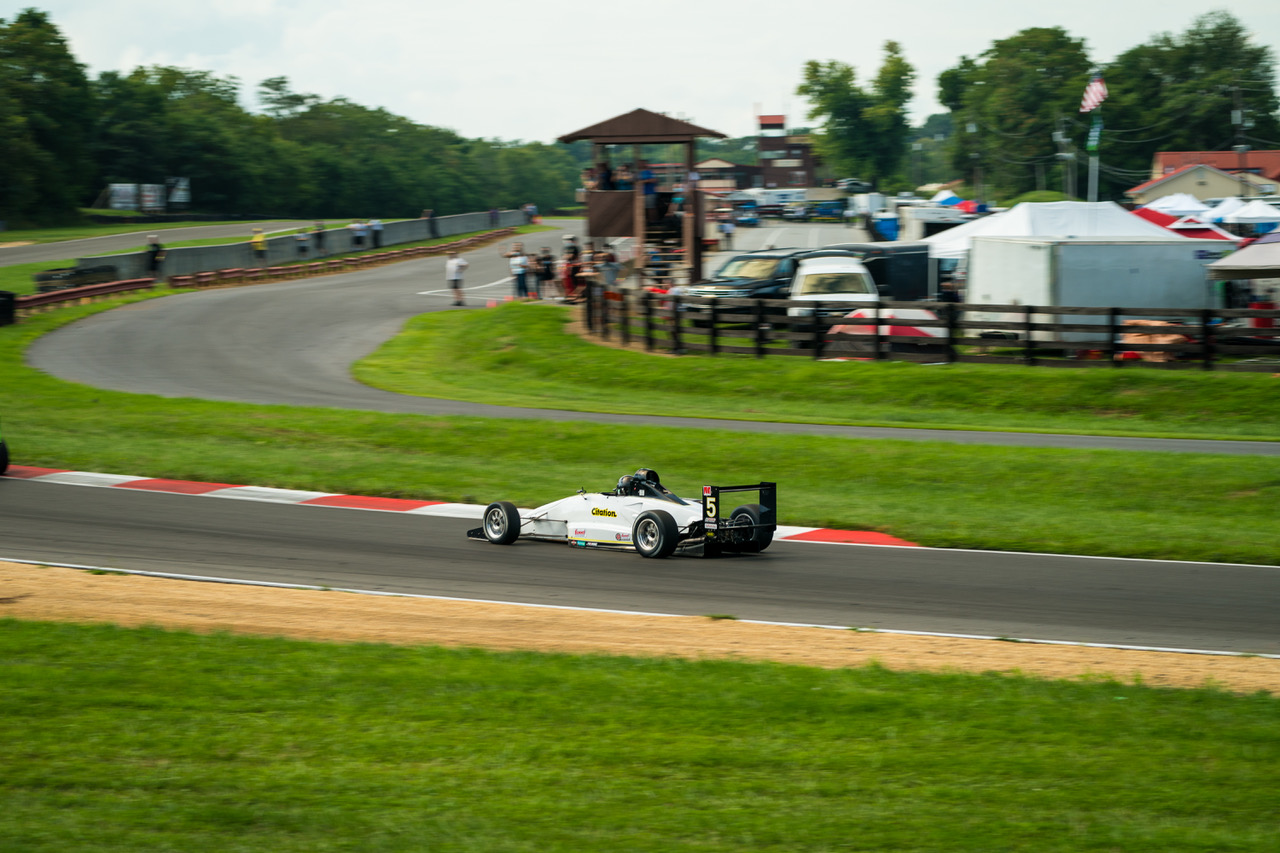 Championship leader Alex Mayer continued his dominating season in the F1000 class by kicking off the weekend with the pole position and never looking back. Scoring the fastest lap of both races, the pole position for both races and standing on the top step of the podium at the end of both races, Mayer has kept his perfect season intact as he extends his point gap to the rest of the grid. Tim Pierce and Jason Slahor scored four podiums between the two as each driver finished second and third respectively from qualifying through the checkered flag at the end of race two.

Robert Wright took the F2000 pole position as multi-time champion and series point leader Brandon Dixon had an issue in qualifying. Continuing his momentum into race one, Wright went on to score the victory ahead of Mitch Regadas and Demitrios Tsesmetzis. Dixon returned to the top step of the podium in the second twenty-one lap race, driving to the front to score the victory en route to the fastest lap of the race. Regadas garnered his second podium result of the weekend with another second-place finish while Dave Weitzenhof was able to join him on the podium blocks in third. 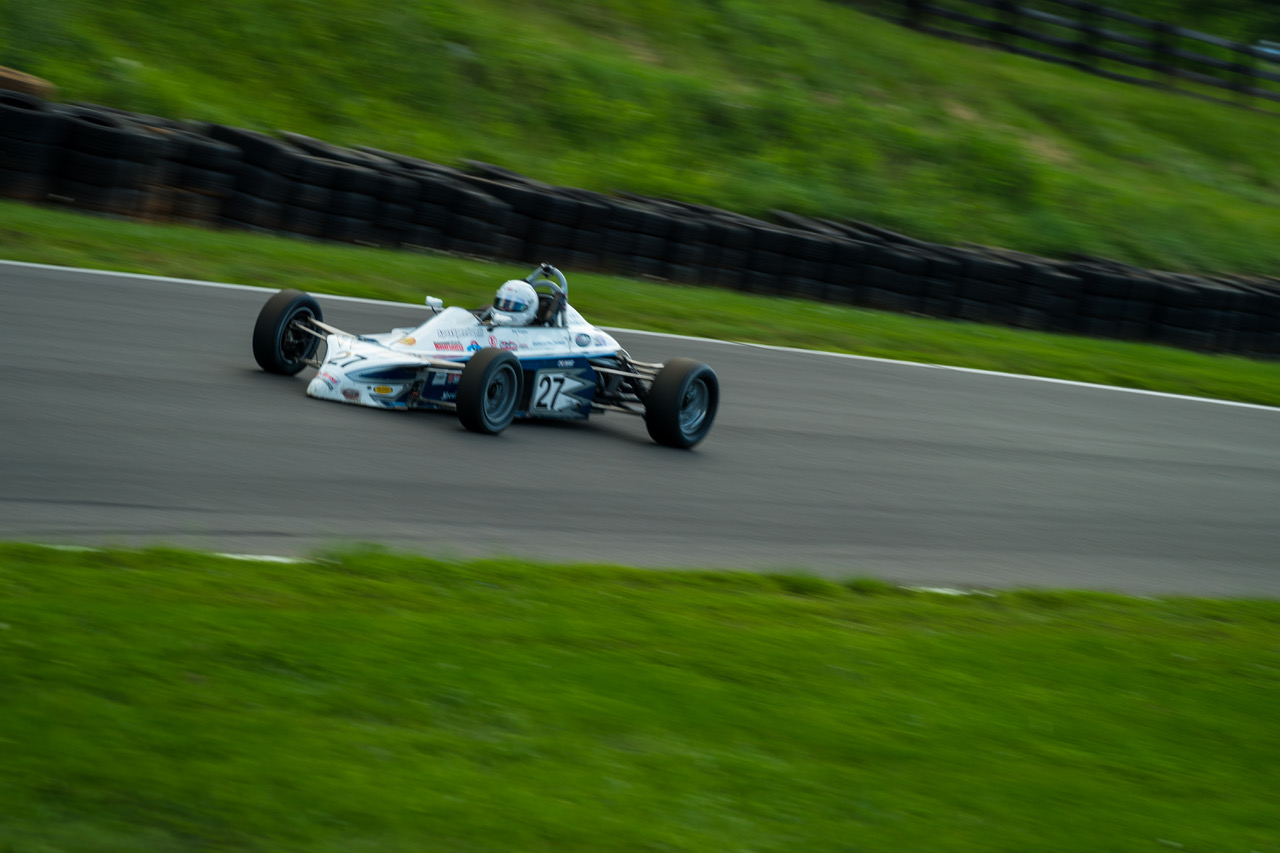 It was all Phil Kingham in the Formula Ford portion of the program as the multi-time race winner continued his winning ways. After scoring the round one pole position, Kingham went on to take all three race wins over the weekend. With clear track in race one and two, Kingham was also able to secure the fastest lap of the race and accompanying pole position for rounds two and three.

Wayne Nicolette was the best of the rest scoring a second-place finish in the first and third races over the weekend and backed that up with a strong third place result in race two. Joining Kingham and Nicolette on the podium, Michael Rand took home hardware for third place efforts in races one and three while Greg Peluso was the only other driver to join in on the RCFFS podium celebrations with a strong second place finish in race two. 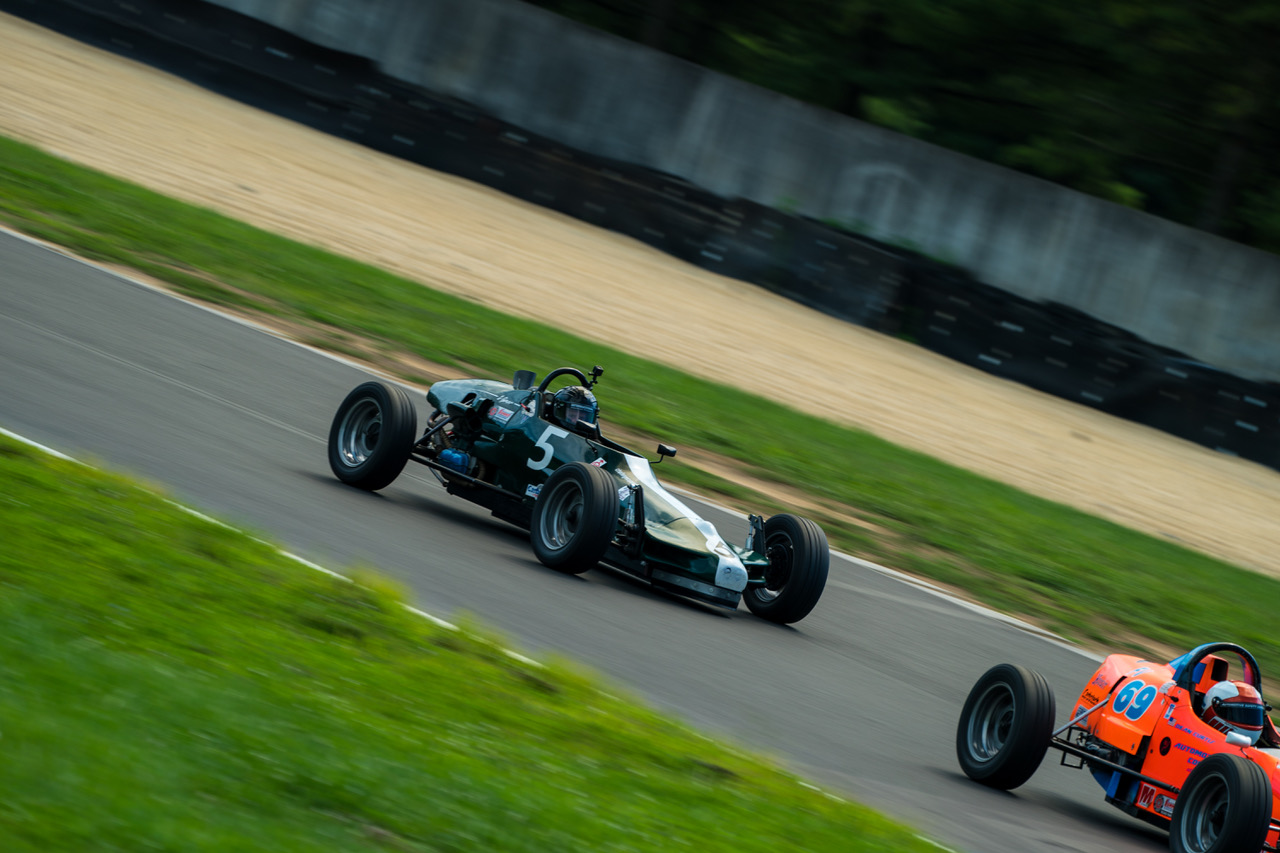 Sam Ryan would take the Challenge Cup Series pole position for race one and turn that into a victory. Not having the fastest car in the race, Ryan was able to keep his competitors at bay to take another checkered flag on the season to top the charts in the Formula Vee Masters category. Mark Farnham finished fifth overall but second in class as Dan Curtis joined them on the podium in third. Matthew Clark and Trevor Carmody led the way in the Formula Vee class taking the top two positions in class. They finished just ahead of Luke Testerman as the trio finished second through fourth overall on track.

Trevor Carmody rocketed to the top of the time charts in qualifying for race two scoring the pole position and inside front row starting spot. Though he was the second driver to reach the checkered flag in the race, Carmody was awarded the win after a post-race penalty dropped Matthew Clark to the tail of the field. With Carmody securing the victory, Testerman stood on the second step of the podium with Ray Qualls in third.  Tim Sager was the best of the Formula Vee Masters competitors finishing fifth overall but first in class while Sam Ryan and Mark Farnham rounded out the podium.

Wright continued, “Once again thank you to all of our teams, competitors, supporters and partners. Our on-track program is proving that we provide a platform that is suitable for both new and veteran drivers and though 2020 is yet to be complete, we are already working to ensure we see growth in 2021. Thank you again.”

With a nearly eight-week hiatus before the final two events of the 2020 season, the Formula Race Promotions teams and competitors will enjoy a break before returning to the Pittsburgh International Race Complex for rounds thirteen through fifteen over the October 16-18 weekend. With a full slate of classes, drivers in F1000, F2000, F1600, Atlantic and RCFFS will be on track for the event dubbed The Post Runoffs Blast.