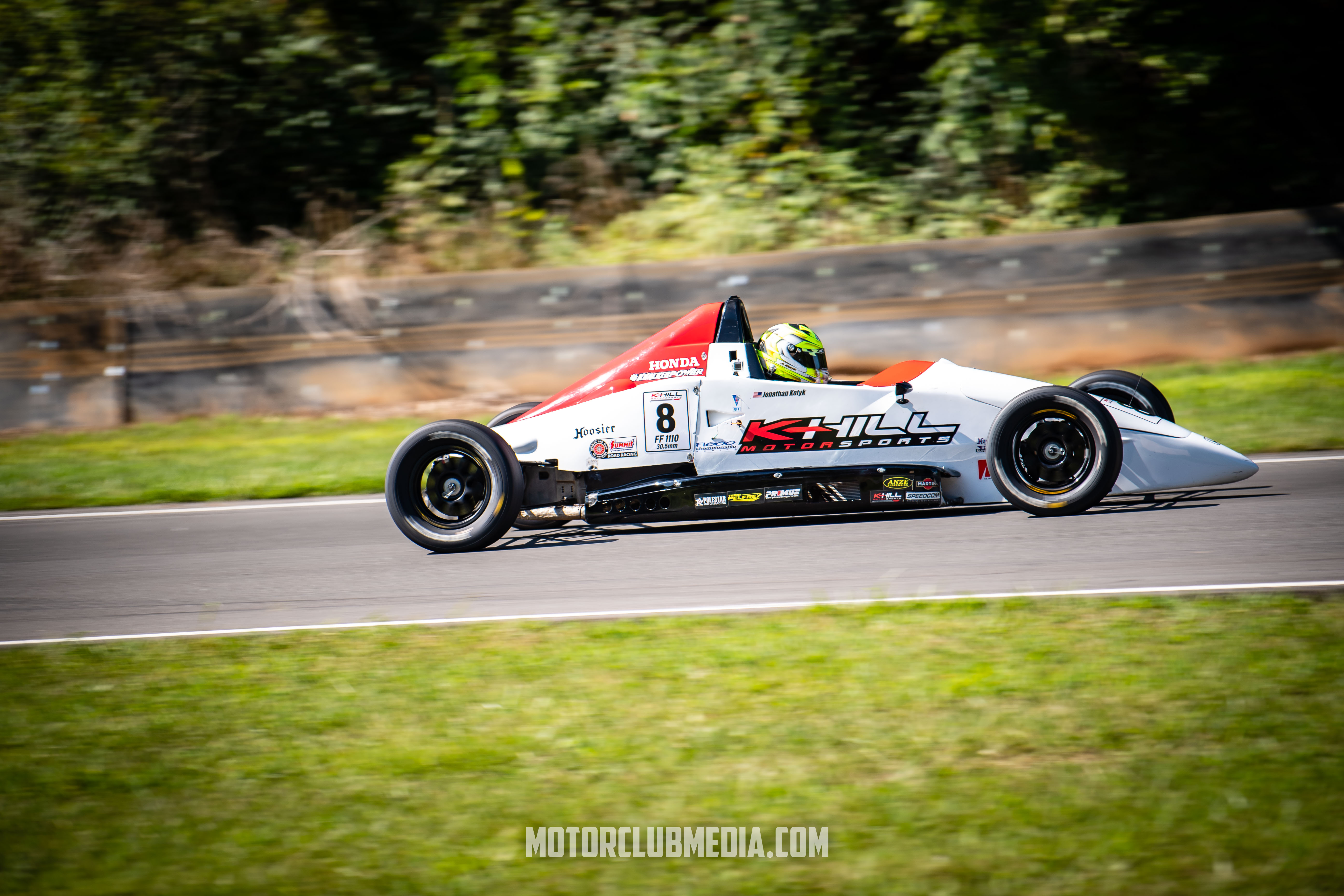 For race three, Jackson Lee starts pole based on having run the fastest lap in race two. After an off track excursions in previous races, Lee will hope his fortunes are better today. Jonathan Kotyk will line up beside Lee. Josh Green starts third, and Bryce Aron fourth. Burton Kyle August is second of the Rice Race Prep entries, he starts fifth. Charles Anti again lines up in the sixth spot. The first master’s entry starts seventh, Mike Scanlan represents that position.

The drivers approach the start line, sure enough the green flag flies. They’re three wide at the front. Josh Green has tires off the track, he has to back out. Kotyk takes the lead, Aron is second, Jackson Lee to third, and Josh Green is fourth.

With fourteen laps remaining, Josh Green has made his way to the front, but Bryce Aron has a go and takes over the top spot into turn one. Kotyk sits third, Jackson Lee is fourth, while Charles Anti runs comfortably in fifth. For Anti, he’s slightly out of touch with the lead pack, but he’s also clear of any direct challenge from behind. With some shenanigans at the front, Anti could find himself in the lead pack.

At the halfway mark, Green is in the lead briefly, but Kotyk goes by. Aron is third, Lee fourth. Anti has closed the gap to the top four, but he’s still not quite in touch, he needs another second or so to reach the leaders.

Five laps remain to circulate, Kotyk leads Green, Aron, and then Lee. The four are playing their usual games. They go three wide into turn one. Kotyk is still out front, Lee is second, Aron third, while Green falls to fourth.

Three laps to go, they go three wide again. Lee takes the lead, Kotyk to second, Aron third, and Green remains fourth. The next time by, Kotyk goes under Lee into turn one. At the same time, Green makes a move on Aron into turn one. Kotyk leads, Lee is second, Green is third, and Aron is fourth. Anti continues to lurk just out of touch. Rubenzer leads the master’s while running sixth overall.

The white flag flies, Lee comes to the line in the lead, but it’s not to be. Kotyk drafts by into one. Lee falls to second. Green is still third, Aron is fourth.

The checker flies, Kotyk is at the point. Lee is second, Green is third, and Aron fourth. Anti comes home a comfortable fifth. Rubenzer wins master’s and finishes sixth overall, Mike Scanlan is seventh and the master’s runner up, while Bob Reid completes the master’s podium.