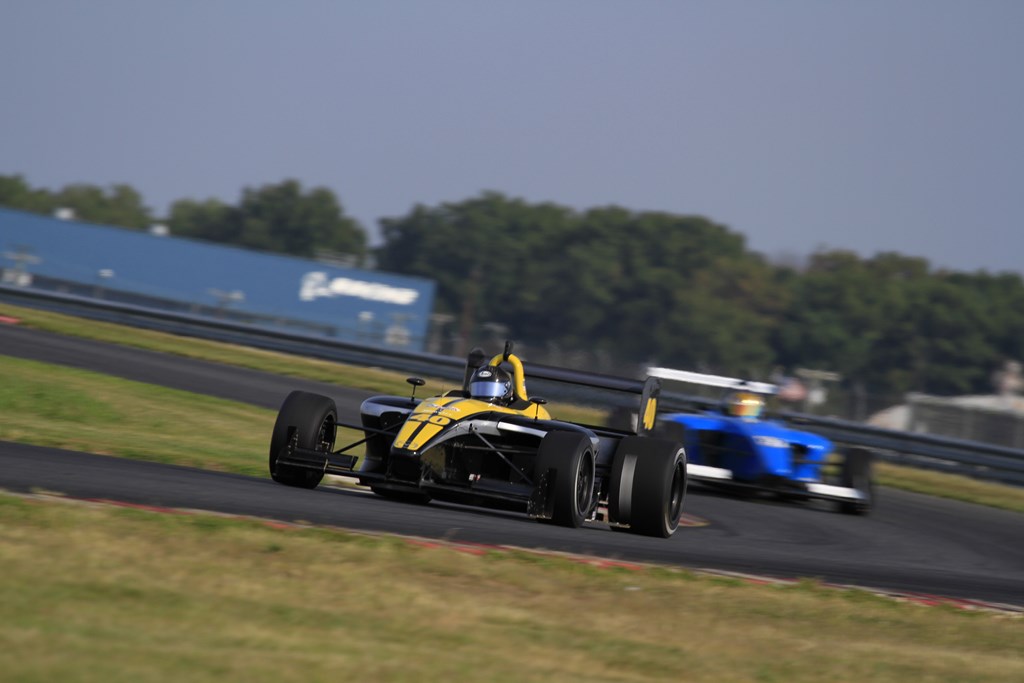 Grant Fight Back to Win While Cangialosi Takes Championship

After a slow start to race one, Keith Grant battled back through the feild to take the race one win!

At the start, Grant fell to fourth. Dario Cangialosi got a storming start, he’s pulled out a nice lead. At the end of the first lap, the gap was four seconds to second place rich Zober. Keith Grant made progress though, he got himself into the third spot. Bob Corliss was fourth, and Flinn Lazier fifth. At the start of the third lap, Grant was now cleanly by Zober, but the gap to Cangialosi is massive at nearly six seconds. The difference between Grant and Cangialosi was on the order of tenths in qualifying, Grant will have to find some major pace to close a gap this large before race end.

With seventeen laps to run, Grant starts finding some of the needed pace. He runs a half second faster than Cangialosi, the lead falls to five seconds even. At this rate, Grant will catch Cangialosi in time, but that pace difference will have be persistent. Of course, lap traffic soon is in sight. How the top two are able to navigate the slower cars ahead is extremely important.

With fifteen laps left, Cangialosi comes in contact with the first set of lappers. His lead falls to just two and a half seconds. Then it’s Grant’s turn to get through. Cangialosi pulls back out to three and a half seconds. The traffic is indeed hard to get through. For the time being, they have clear road ahead. The race is dependent on outright pace, at least until they catch lappers.

Twelve laps on the counter, Grant closes the gap to three seconds. More lappers are in sight. Cangialosi will likely make contact this lap or next. In the meantime, Grant runs the fastest lap of the race, he closes in on Cangialosi, there’s only two seconds between the two. The race is getting hotter by the lap.

Ten laps to circulate. Traffic is really tight now. Grant is held up while Cangialosi scoots away on semi clear track. The gap has definitely grown some, it’s over two seconds as they cross the line.

The two leaders have navigated through the traffic, there is enough space ahead that they will run on clean track likely until the end. The gap continues to shrink though, there is no doubt that Grant has the pace advantage. Grant continues to run faster and faster laps, Cangialosi is stagnant. Grant will have to contend with the aero wash from the car ahead, the fight forward won’t be as easy as it once was.

With five laps left, Grant tries a pass into turn one. Cangialosi goes defensive, this bogs down Grant behind, they both crawl off the exit of turn one. It’s a drag race to turn three! Grant gets down the inside, they go side by side into turn three. It’s Grant to the lead! In third it’s Lazier, then Zober in fourth, and Alexander in fifth. Cangialosi, in finishing second, wraps up the 2019 championship lead. He cannot be overtaken, and thus, he is the 2019 champion!