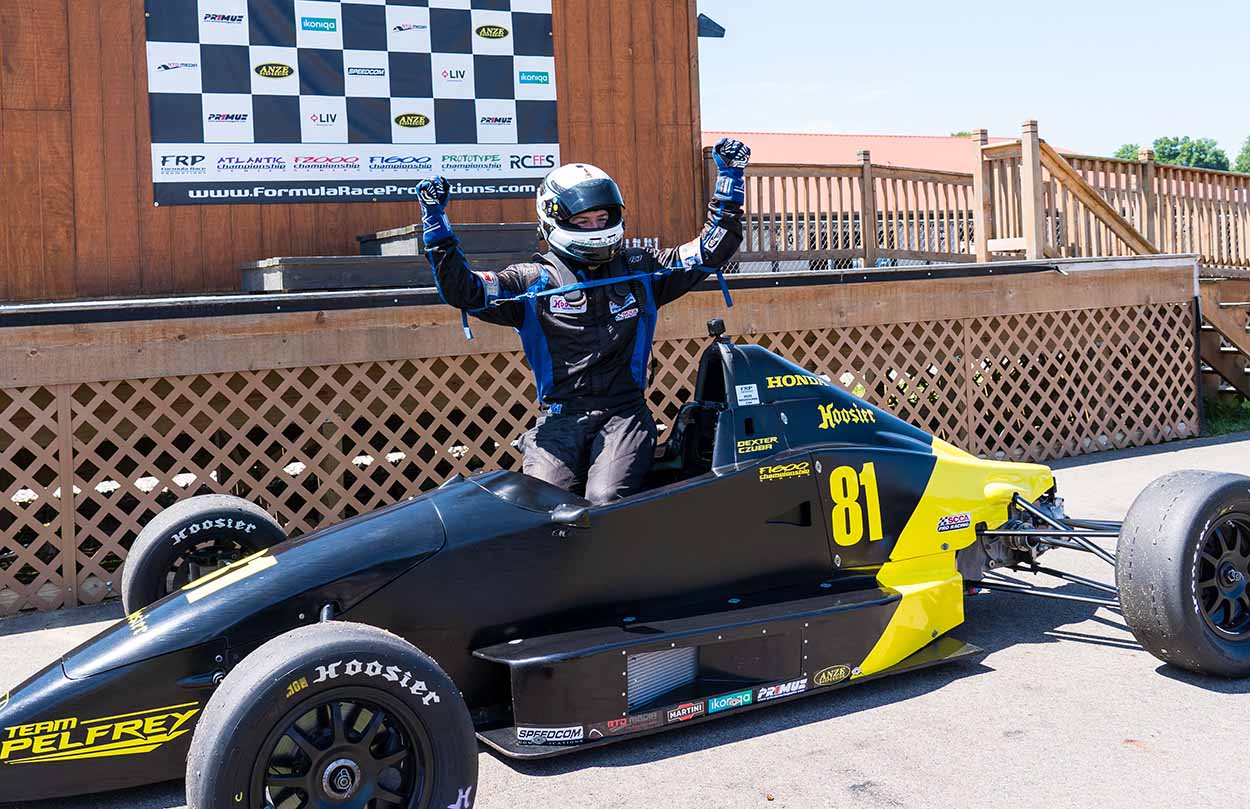 As we continue to build the Formula RacePromotions online presence, promotional programs and overall footprint, FRP is please to introduce the bi-monthly ‘Hoosier Tire Spotlight’. With the aim to tell the story of a specific team, driver, crew member or other, FRP will dive into the person of choice by talking to series officials, competitors, team owner sand more. Running around the first and fifteenth of each and every month, the first Hoosier Tire Spotlight is on recent race winner and Team Pelfrey driver ,Dexter Czuba.

Growing up as many of today’s motorsports stars do, Dexter Czuba was often seen hanging around kart tracks and topping the podium blocks. Scoring multiple karting wins and championships dating back to 2007, Czuba made the jump to cars and had instant success. Adding multiple SCCA race wins and podiums including the NARC Runoffs and multiple Hoosier Super Tour events, one thing was missing from Dexter’s trophy collection, a Formula Race Promotions victory, which he finally earned at the most recent event at the Mid-Ohio Sports Car Course. 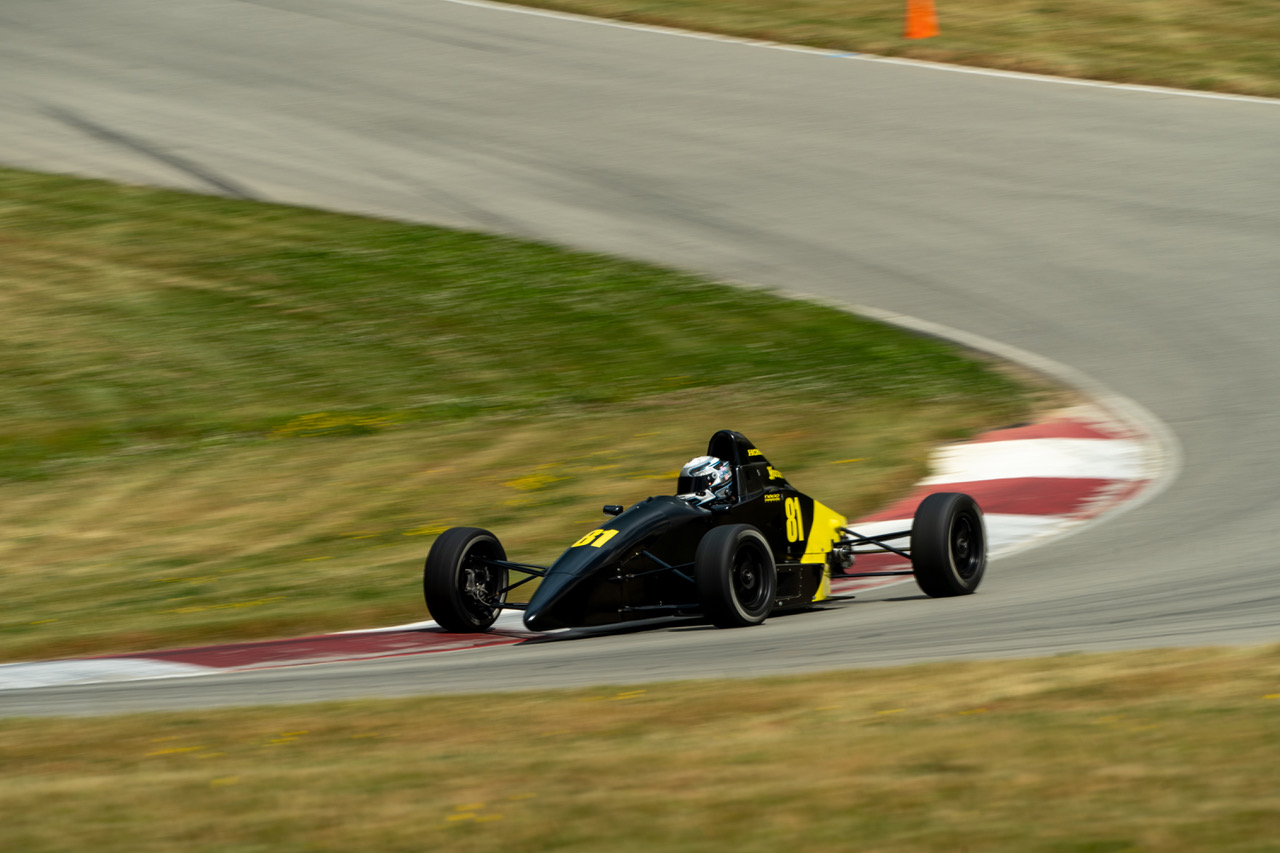 “My first pro win at Mid-Ohio felt amazing after racing in the series for several years and achieving many podiums,” expressed Czuba. “It proved to me that I could compete at the same level as these future stars. I’ve improved my racing style to be more aggressive at the key moments in the race and the victory validated that approach. After a strong start, I thoroughly enjoyed the wheel to wheel fight with Simon over the full race distance. In the end, I positioned my car correctly during the last couple of laps and was able to hold the lead.”

“Dexter is a talented driver that I have enjoyed racing against both this season and last,” explained multi-time F1600 race winner and current championship points leader Simon Sikes. “He is quick on the track and smart during races. He and I battled for the win in the second race of this year’s Mid-Ohio weekend, and he earned the top step of the podium with a fantastic defensive drive on the last lap. Approaching the season, I knew he was going to be a serious title contender, and he has proved to be so far. I’m looking forward to good battles with him for the rest of the season.” 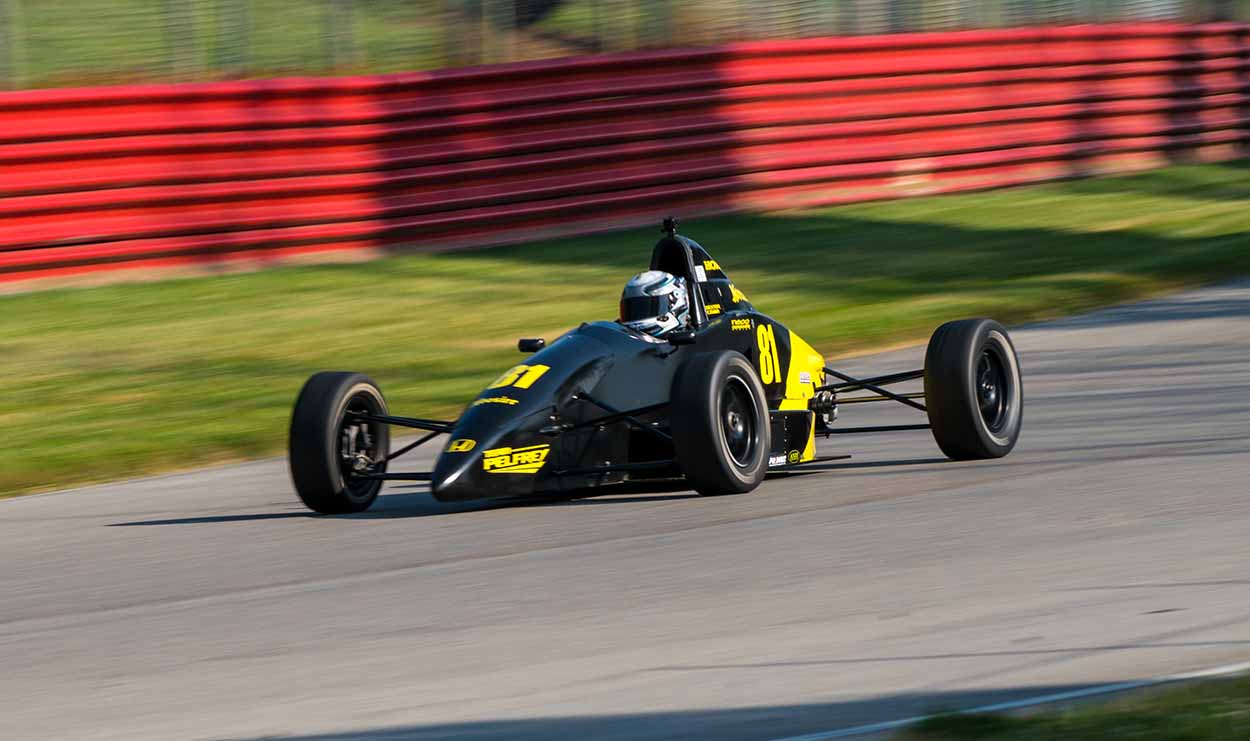 Greg Rice fromRice Race Prep added, “If one of my guys does not win the race, then we’re going to enjoy seeing Dex on the top step of the podium. Great to see someone put in the time to move from the back of the grid to the front, after supporting the FRP program for many years.”

“It’s been exciting to watch Dex improve his skill and race craft,” continued FRP Race Director Mike Fultz. “With his calm commitment and determination to the sport, we will often see him on the podium in future races.”

Dexter’s Coach Tyler O’Connor also added, "I first met Dexter at an SCCA regional event in New Jersey at the end of 2017. I knew right away he had the potential to challenge for wins in FRP's F1600 Championship Series. Dexter made tremendous progress last year running a partial season, while balancing a busy school schedule.Some highlights included multiple podiums in his first pro weekend with Team Pelfrey at Watkins Glen, and a second-place finish at the Pittsburgh International Race Complex after fighting for the win on the last lap. Dexter has always been a quick study, and one of the hardest working drivers in the paddock in terms of reviewing data/video to improve his race craft. Seeing all the pieces come together and watching him capture his first pro series win at Mid-Ohio was rewarding for everyone involved. We are all very proud of how far he has come in his first year with Team Pelfrey and look forward to more race-winning battles in the near future." 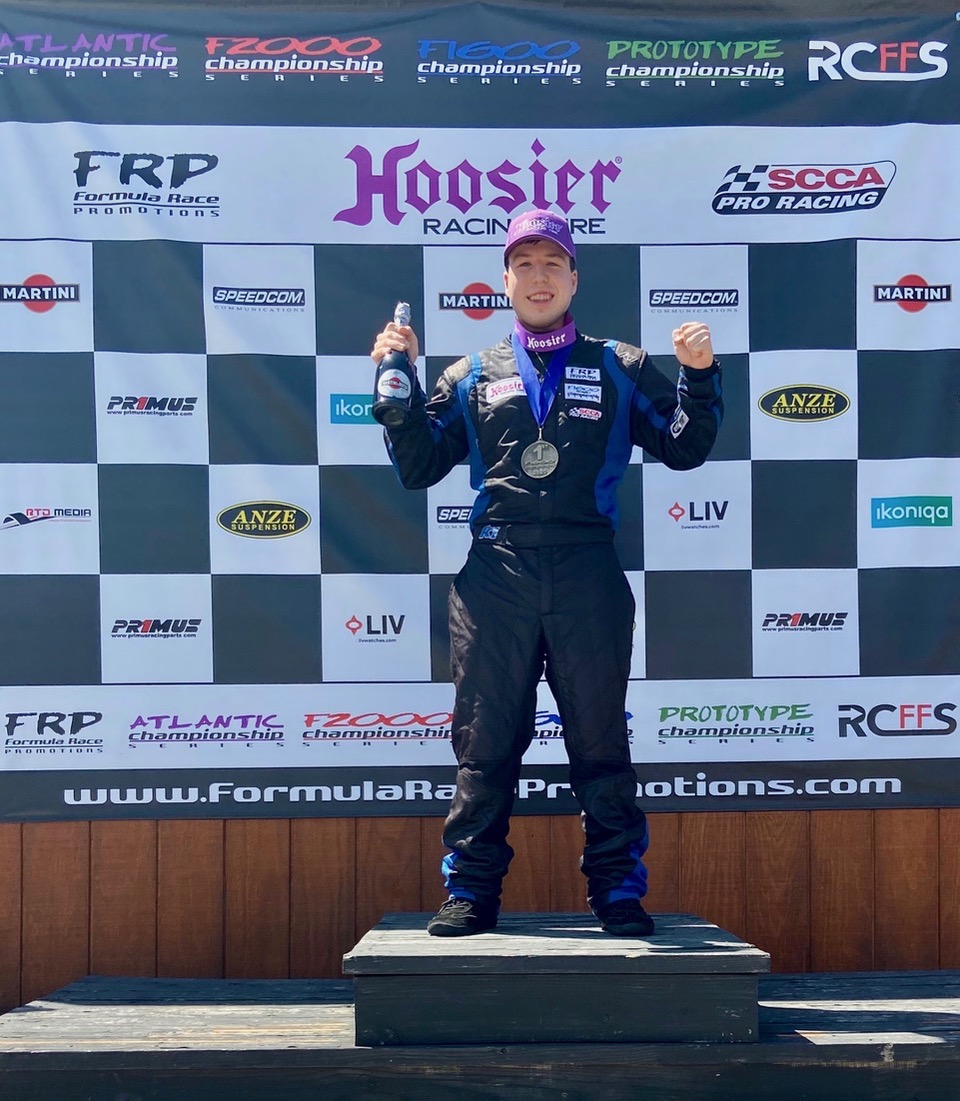 Outside of the car, Dexter is a Senior at the Worcester Polytechnic Institute and has been admitted into the Graduate Mechanical Engineering program. With an eye on the top step of the podium while on the track, Dexter has his sights set on the top of motorsports as he looks to not only make it his profession, but a career that keeps him involved in motorsports at the highest level possible.

“In two-years I expect to earn Bachelor of Science and Master of Science degrees in Mechanical Engineering,” add Czuba. “My ultimate goal is to become a race engineer for an F1, IndyCar, or LMP1 Team while continuing to race as much as time and funds permit. I’ve been told that my consistency makes me a great candidate for sports car endurance racing so hopefully I can develop such an opportunity.” 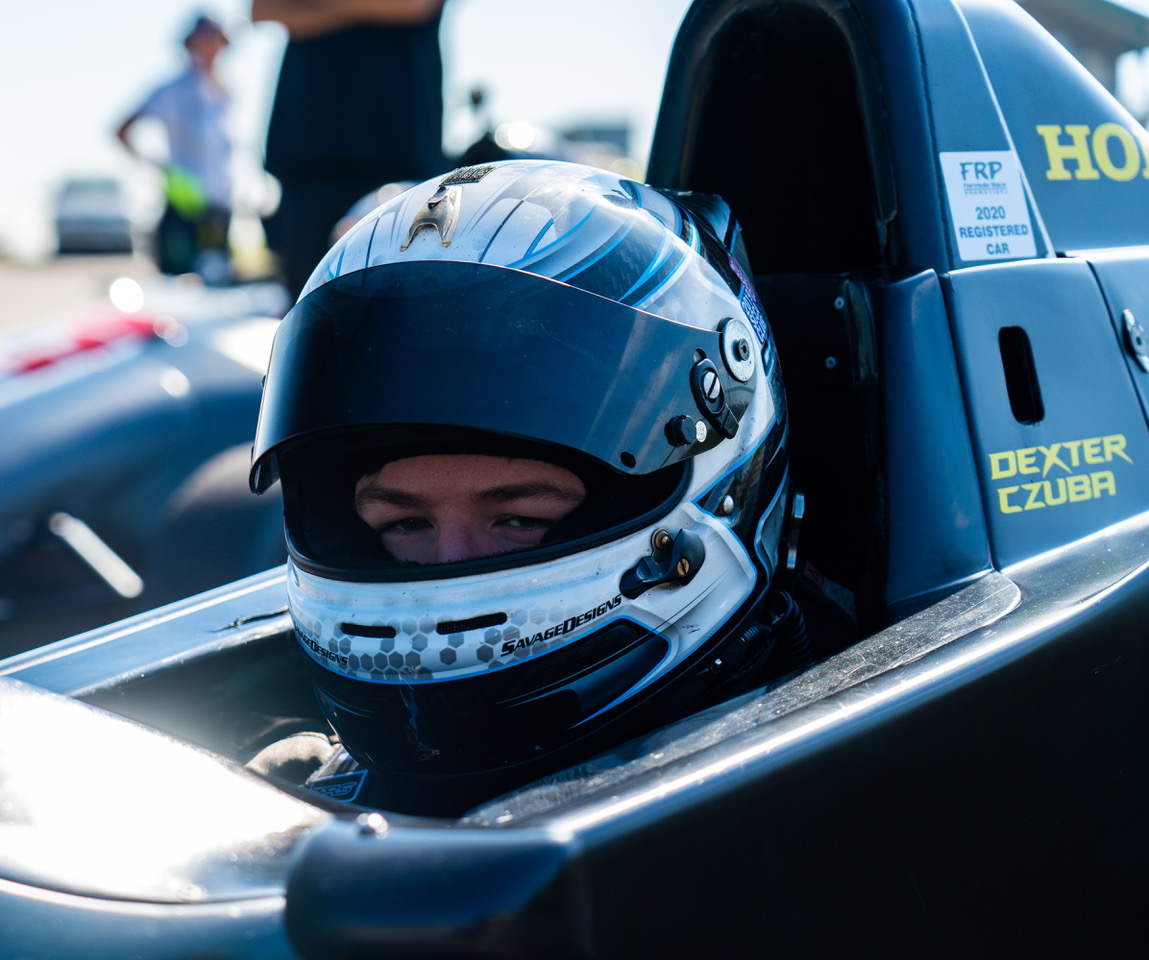 Gregory Czuba, father of Dexter, is proud of his son and everything that he has accomplished to date and is excited on what the future holds. “Since a young age, Dexter has exhibited outstanding persistence, dedication and skill in all that he does. I’m extremely proud of his many accomplishments in and out of the race car. Dexter consistently maximizes his ability and is respected by his competitors as a hard but fair racer.”

Back on track this weekend, Czuba will be back behind the wheel of his familiar Team Pelfrey machine as he looks to add to his win total. With the first one always the hardest, Dexter will aim to continue his winning ways at the Virginia International Raceway.

“I want to thank Team Pelfrey for consistently providing fast, reliable race cars.In particular, I have been helped immensely by Tyler O’Connor’s coaching and Geoff Bushor’s leadership and encouragement. I want to be sure to win for these guys!”

Catch Dexter and the rest of the Formula Race Promotions program this weekend at the Virginia International Raceway in Alton, VA.